I learn so much as a human being who has eyes and ears and occasional numbness in my pinky toe. But I had no idea how much I repressed what I said until I saw this on Facebook: 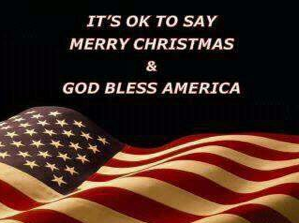 I wept silently into my Old Glory hotpants for about an hour. But after my crying jag, I felt liberated. Clearly Christmas is under attack. Why else would Christmas decorations go up Oct. 25 when they should be up after July 4th? The intention is to rip this holy commercial holiday right out of baby Jesus’ tiny baby hands and beat the crap out of it with baseball bats emblazoned with the slogan: “Happy Holidays from Al Qaeda!”

But guys.. did you know it’s okay to say “Merry Christmas” and “God Bless America” without being struck down by the iron fist of straw men?  I feel like a giant weight made out of air has been lifted off my shoulders.

However this got me thinking: what else is it “okay to say” that for some reason or other I wasn’t saying because it was not beautifully set against a backdrop of a waving flag?

Get ready for some freedomy freedom being freedomed your way: 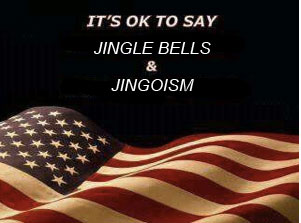 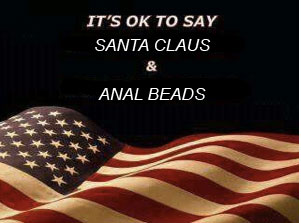 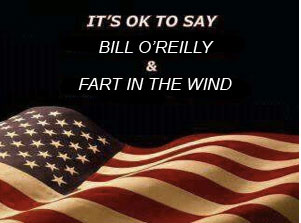 And lastly my favorite:

My last few blog posts had a tinge of the seriousness–postpartum depression, the turd-like manner of Dr. Phil, the season finale of Bachelor Pad 2.

Now it is time to lighten the mood, which is why I’ve chosen religion as my topic. Religion is fun and people can be really funny about their religion.

I like how people use their religion to excuse their abhorrent behavior. We have an annual summer relay race. This is a long-standing tradition, almost dating back to the time when Enoch begat Methuselah. It requires blocking a few roads. Well this one man decided to barrel his giant black SUV directly into the path of soon-to-be arriving runners. A race official stopped him. He rolled down his window, stuck out his sweaty, tomato-red face  and screamed “I have to get to church!!!” Bits of spittle flew in every direction. He then peeled off to go angrily pray, I guess.

I like how around the time Christmas trees show up in stores (Sept. 21), millionaire pundits immediately get on the airwaves to once again decry the invasion of Christmas by non-christian boogeymen. Apparently every time someone says “Happy Holidays,” an angel loses its wings.

So there is much I like about religion, but I will admit that I have a tricky relationship with it. I was raised Catholic, but I began to have problems with it around the age of 7 when I had my first Communion and read in my little sin book that it was mortal sin (i.e. you will burn in eternal hell fire) to miss church. My family notoriously missed church or made it for the last 10 minutes to stand in the back and then leave early. By 14, I was done, and only got confirmed because my mother made me. The conversation went something like this:

But I don’t believe in any of it!! (in a teenagey, whiny kind of voice)

Well you’re going to do it.

But you don’t even go to church!!

For some reason I ended up going to a Jesuit college. This was not the best fit. I remember in a mythology class, the teacher talking about beliefs in the afterlife and asking students what they believed. The general consensus was clouds, harps and angels. He then asked if anyone believed that nothing happened and I was the only one to raise my hand. He asked me how I could lead an ethical and moral life if I didn’t believe anything happened after I died. Um….because I’m not a sociopath, maybe? I think I might have said something like “because I don’t need the threat of punishment to not act like a douchebag” or “what the f*** is wrong with you?” For some reason, I did not get a good grade in that class.

So like I said–tricky relationship. Just for the record, I have no idea what happens after you die. It hasn’t happened to me yet, so I will have to get back to you.