It is blog that will tell you everything you want to know about Canada, which is in the northern part of the United States.

I’ve just been informed that Canada is its own separate country. Really? Okay.

So the blog will be about Canada things, which will seem like Maine, but not real Maine-y. Because apparently Canada is its own sovereign nation. I am now thinking I will need to rewrite my Canadica blog post about Canada being the stupidest of the 45 states.

Oh, that’s right or write? I’m writing for it along with much more talented bloggers that likely already knew Canada was its own separate place with a flag, an anthem and a sex tape.

The first blog post will be written by Canadica’s creator Sweetmother. She has written a much more coherent post about Canadica here.

The point is you should follow it. Doesn’t this picture alone make you want to follow it?

Historians can be so mean, you guys. Like you’re doing your thing, you’re founding your country and setting up your laws to benefit people who look exactly like you, and then some dork loser historian keeps writing about how you owned like 300 or something slaves during that time period, and you’re like, “Hey, that’s mean!! Take that back.” And the dork loser historian is like “Make me, dick.” And you’re like “Well, I can’t jerk because I’m dead.” And the dork loser historian is like “You snooze you lose.” And you’re all like “What does that even mean!?! God, I HATE you!!” And then you cry into your pillow until your ivory teeth fall out and you eventually pass out.

I imagine that is what the ghost of George Washington does every day knowing that some dork loser historian wrote in some even dorkier, loser history book about his slave-owning ways.

Isn’t there something we can do to stop George Washington’s pain, you guys? I mean, it like sucks, right?

I know! Let’s, like, take all references to slaves and slavery out of the history books! Slavery was so blech, you guys. It’s like such a downer. Do you think anyone would even miss it? No way.

Oh wow! I wasn’t the first to broach this kickass idea. The Tennessee Tea Party presented a list of five legislative priorities to the state government, and one demands the removal of any reference to any slave-owning done by any Founding Father including Thomas Jefferson, who was a real founding father, if you know what I mean. You don’t? I mean this.

Tennessee Tea Party Leader Hal Rounds thinks any mention of this is “race-baiting.” Exposing the Founding Fathers’ love of owning people disparages them in ways that hurts their feelings, you guys, and it totally needs to stop.  As Hal says:

“(The kids) are being taught (the Founding Fathers) were hypocrites and slave owners and part of the teachings about slavery was that it was inherently cruel.”

I know, like, I’m sure there were times when slavery was inherently fun! Like, maybe one day the slaves were given some extra bread at dinner. I don’t think every day was filled with terror and degradation, right?  Why do we always focus on the negative? And by the way, “White people were whipped too,” Hal says.

Or what I mean to say is, well turded, Hal. Your actions have earned you the coveted Turd of the Week™. 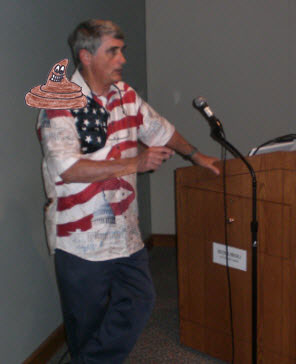