Well fuck a duck, I am back in the world I belong.

With people? And their breathing? And farting?

It’s just too much arm flesh and air molecules and tote bags. We are much safer here, readers. Let’s never leave again.

I have a few stories from my roadtrip to the “Insurance Capital of the World” where I librarianed it up for 2.5 days that I wanted to share with you because duck a fuck, this month will never end.

And–I shit you not–but I got Adam Gidwitz’s autograph!

It’s likely you have no idea who I’m talking about (Alice might), but to a pack of middle-aged librarians, these guys are the the 12-year-old girl’s version of One Direction.

Jon Scieszka wrote The True Story of the Three Little Pigs and The Stinky Cheese Man and Other Fairly Stupid Tales, which if you haven’t read, you must read now.

You don’t have either? Go to your library then.

Okay, are you done?

Adam Gidwitz wrote my favorite new series A Tale Dark & Grimm, in which he basically un-Disneyfies all these Grimm tales and we get back to the head removal and children eating.

In other conference news, I was woken from a crappy sleep at 2:30 a.m. by a man, and I believe, two women drunkenly trying to get into the room next door. It appeared from my vantage point in front of the peep hole that they could not conquer the difficult task of inserting the key card into the key slot so that other things could be inserted into other slots.

It also appeared as if the bloke did not know the two women (or woman) all that well although one attempted to mount his back several times. She then would let out a peal of laughter that caused my teeth to rattle out of my head and drop to the floor.

After what appeared to be 20 minutes, the guy opened the door and pushed the woman or women inside and said good night.

A minute or so later, one of the room’s occupants attempted to get out again, but was stymied by the door latch. She gets an A for effort though since she bashed that door against the doorframe about 50 times.

Speaker7 is glad to be back home with consistent Internet access so she can continue to churn out posts as a member of Nano Poblano Team. Only 13 left to go!

It’s hard to blog. There’s so much on TV. Occasionally you have to eat or go to some place that employs you. And then there’s the thinking of some clever Halloween costume. You really can’t go as Bernie Madoff again. That is soooooo 2008.

So you despair. You think “Oh jeez, here I am writing another post about colostomy bag decoupage. Am I going to lose readers?”

But that’s why I’m here. To tell you how to write the bestest post ever. Follow my surefire method and you will sure feel the fire. . . of awesome writing. Clearly only an awesome writer could write a sentence that awesome.

People love them some controversy because it’s so, like, controversial and stuff. But you’ll find when you take a stand on something controversial, you attract the crazies into your world. I found this out the hard way by posting something a little political on my personal Facebook page, which prompted a “friend” to go ape-shit crazy and write a horribly racist reply. Story has nice ending though since “friend” is now “unfriend”.

It’s way better to write about something everyone agrees upon, but sound like you’re taking a stand.

“I know I’m gonna take some heat for saying this, but I think ice cream is creamy.”

“This may shock you, but I am a big supporter of fall foliage.”

“Well readers, today I’m taking a stand. I am against…I’ll write it again…AGAINST exploding the earth.”

And then your readers will feel all smart and cutting edge for agreeing with your “controversial” stance.

You may have noticed the whole Freshly Pressed thingamabob on WordPress, yes? They like them some pictures, the picturey the better. But what if you take pictures like this?

Yes, that’s a problem. But did you know about a thing called the Internetscape? It has pictures on it that you can take to prettify your blogscape. Some of these pictures you can actually use too without violating someone’s copyright. (FYI–the picture of my feet is protected by copyright) 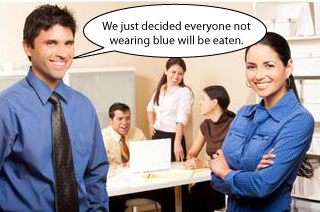 You can even combine the two, and suddenly it’s not just some royalty-free images, it’s art, man.

I call this piece “Is anybody listening, dawg?”

So what do the people like? They seem to like this singing mop-head named Justin Fever. And Fruit Roll-ups®. Oh, and travel blogs. People love them some travel blogs. But what if you don’t travel? What if you’re like me? Someone who always likes to say “Oh my god, I love traveling” while coming up with a million reasons to avoid all travel because traveling is a giant ass ache?

There’s no reason you can’t turn your trip to the grocery store into an epic adventure.

For example: I drove slowly down the street, relishing the frequent traffic lights I encountered. At one stop, I glanced to my left and spotted a delightful pawn shop. How quaint! It makes one feel like they’ve stepped back in time looking at the VCR on display in the barbed-wire covered window.

People love them some lists. Why?

1. Because they feel like they will learn something about something

3. Because lists remind them of “My Favorite Things” from The Sound of Music and who doesn’t love that movie?

5. End with something memorable.

Sometimes it’s hard to come up with an ending. When I run into that trouble, I tack on an inspiring message at the end–even if it has nothing to do with anything I just wrote because people like to be inspired. Do you know that 95 percent of the population own some version of the kitten “Hang in there, baby” poster? 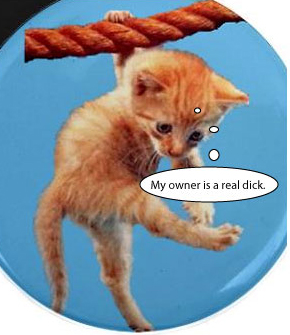 Hang in there, baby.

I actually left my home and laptop, and traveled to New York City this past weekend.

It was weird. There was the outside and real people and very limited access to wireless networks so I could not check my wordpress site stats every five minutes like I typically do.

I met up with my two closest friends from college. We are getting old, and at one of our “Jesus Christ, we’re this old now?” celebrations–otherwise known as a birthday–we made a solemn alcohol pact that we would go on a trip every year.

This is the first.

We stayed at the Millennium Hotel near Ground Zero. I don’t have a picture of it, but I do have this:

This is my foot. I was trying to take a picture of the view. This would be the view of a bed bug sitting on top of my head.

I had just lasted six hours on a train without Internet access so I was eager to tap into the free wireless access at the hotel. No such thing in NYC. You had to pay, and considering I just doled at $4 for a tub of lip balm fit for a Barbie Doll, I figured wireless access might be a tad pricey. 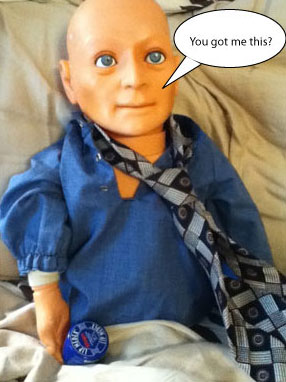 We ate at a Korean restaurant the first night. I don’t remember the name because I am American and if it doesn’t say “McDonald’s” then I will not remember it so let’s just say I went to a non-McDonald’s. I don’t have a picture of my dinner, but I do have this picture I took at the Museum of Sex: 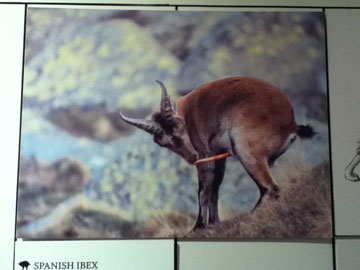 Incidentally that is not what I had for dinner.

The second day was all about seeing the sites. We stopped in a perfume shop that likely had a name, but I’ve forgotten it. The perfume was costly, like 40 tiny tubs of lip balm. I asked the saleswoman if she would be interested in developing a Christian Grey scent with me. In the Fifty Shades trilogy, Ana is always going on about the fantastic smell wafting from Christian’s body. She describes it as the “Christian smell,” which is pretty descriptive. The saleswoman asked me what that smell is and I said I believed it was a combination of Axe body wash, lube and vag-flavored ice cream. She asked me to leave. 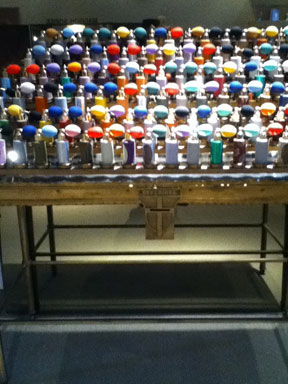 We trekked to the Empire State Building and were immediately accosted by a bunch of people in blue vests. One blue vester had the better ticket deal, he insisted. If we purchased tickets inside the building, then we would have to wait 16 hours standing on hot coals while shadowboxing roosters. If we bought from him, we just would have to pay more. Not a bad deal.

We bought tickets inside.

The view. Not my foot.

Here are my friends:

I also do weddings. 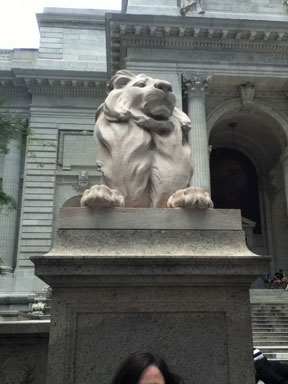 Me and the lion who starred in Ghostbusters.

Me and a fern?

A butterfly landed on my foot and made love to it for several minutes. No one seemed to care. That’s New York for you.

The butterfly moves on to make sweet love to my friend’s hand. I’ll admit it. I felt used. And a little jealous.

We had an encounter with “Joke Man,” a guy who tells jokes for $1. I warned him that I was humorless.

We had a fantastic dinner at some Italian restaurant. You should really try it if you’re ever in NY. I cannot remember the name or begin to tell you where it’s located, but check it out. I don’t have a picture of my meal because it was dark and my belly was full of Chianti and despair over making joke man displeased. But I do have this:

Bed bug peen at the Museum of Sex. This is the main reason you want to avoid bed bugs while in NY.

Incidentally I did have bed bug peen for dessert.