I am a full-fledged carnie, I’ll admit it.

I pretty much do the bidding of a French-Canadian clown who can flex a singular ab muscle like nobody’s business.

Why do I do this?

I think it’s safe to say that I’m in a cult…or rather le cult. Le cult of le clown. I think that’s how French works; you put a “le” in front of everything and ruin freedom fries.

Le Clown first appeared on the presses of word back in February and the wordpresses have not been the same since. I believe his first post was:

I might have made that up, but who has time to research when you’re writing a post every day?

Le Clown professes that every day is fucking magical, and I believe it. Even when my slice of pizza fell on the dirty floor a couple days ago and I had nothing else to eat but a jar of pureed turkey and sweet potato, I felt the magic.

Le Clown can write anything, literally anything, and 200 people will show up to comment about his magnificence™. (He’s also trademarked the word magnificent™)

And it will be pressed fresher than a steaming pile of cow manure–that’s just how powerful his reach is. And you know what? Poop is magical.

What is Le Clown’s greatest gift?

Well apart from his incredible charisma, he gives the gift of viewership. He features you on his site, and suddenly you have 30 new followers. It’s almost as if you, yourself, have become a cult leader.

You feel that way until a half-man puppet named Hugo reminds you of your place on the food chain. Never join le cult of le Hugo, by the way.

Le Clown recently launched a new venture, a press releases page that highlights blog posts featuring his le clowness. I am not on there, and I made it my Life Goal 2: Electric Boogaloo to rectify that grevious injustice.

Which leads me now to present the greatest interview in the history of interviews. I should know, I used to work as a reporter and got to interview the local dairy princess.

Q: Which cult figure are you more like and why? 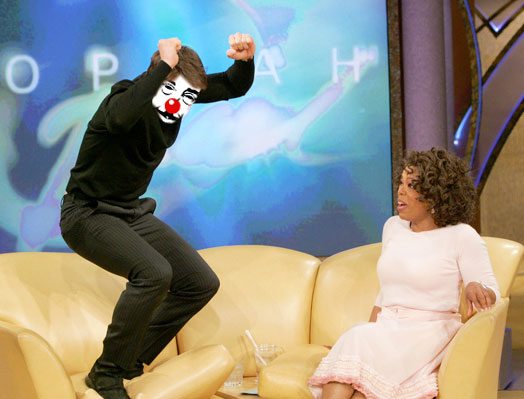 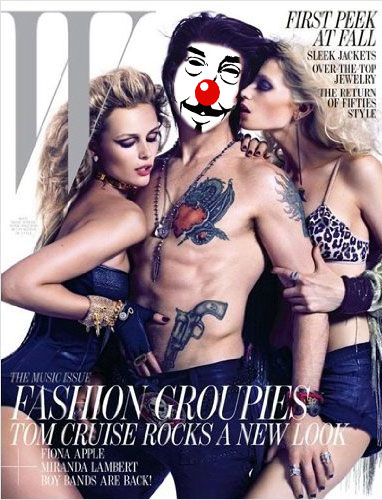 Q: Why is your following predominately made up of dames and/or broads?

A: Le Clown likes to think women dig him because of his Charles Bukowski charms. And that giganormous red apparatus of his.

Q: How do you lure us under your spell? Is it hypnotism? Or that dorky thing Eddie Cullen does? Or something clownesque?

A: Le Clown is more like herpes, the gift that keeps on giving. And because every day is fucking magical on A Clown on Fire, and Le Clown is something of a handsomer Santa (or any other non-denominational fictitious character like White Baby Jesus) there’s a bad case of clap for just about anyone on his blog. It’s the latest craze, and all the cool kids want it. As for Edward Cullen, fuck him, not just literally, unless you’re into glass shards.

A: The trademark™. Obviously.

Q: Usually cult leaders have some fantastical idea of how they’re going to kick the bucket. L. Ron Hubbard apparently discarded his body and went to some planet. What will happen to Le Clown?

A: What’s this crazy talk about kicking the bucket? Neil Gaiman will soon write Le Clown into a new installment of his Eternals. At least, that is what Scientology told him. Dying is for the weak anyway… everyone knows that, right Hugo? 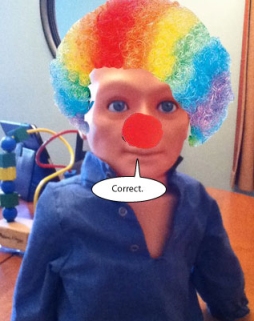 Dearest Reader: Speaker7 is attempting to write a post every day in November so she doesn’t have to participate in NaNoWriMo (National Novel Writing Month). This is the eleventh post. She enjoys doing this because every day is fucking magical.