Stop the muther-fucking Internet, people! I’ve got a BIG announcement…

Wait, how do you stop this thing? Is there a button somewhere…no that’s just brightens the screen…maybe this one? ª No, it just makes a tiny floating “a”….okay, I don’t know how to do it. The fact that I can’t stop the Internet in no way diminishes this AMAZING breaking news:

I’m just going to give you a moment to let that sink in…and to google who Rob Schneider is.

It’s almost as big as that time Fred Sampson said he wasn’t going to shovel the curbcut in front of his house if the plows were just going to pile big mounds of snow there.

It’s nearly as monumental as that time Ginny Smith was asked “How was your weekend?” by Amy Nedrow and answered “Kind of sucky” rather than the requisite “Fine, how was yours?

And it’s practically on par with that time that bear shit in the woods that one day.

Schneider blames the California Democrats for killing the creative spirit that could have made Deuce Bigalow: Beating a Dead Horse With Another Dead Horse a reality. 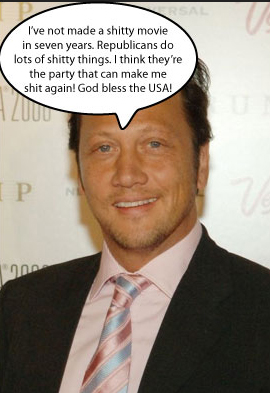 The Democratic Party “no longer serves the people of this great state,” opines Schneider. “When the sitcom Rob was canceled, it was like a seagull was suffocated by the great big donkey that rules with its iron hoof.”

He also had to move his “vitamin company” out of the state due to state regulations that demand vitamins actually contain more than sawdust and lost hope.

That logic is as solid as the plot of Hot Chick.

Instead, Schneider is throwing his slight build behind California Assemblyman Tim Donnelly’s bid for governor. Donnelly is a leader of the California Minutemen, and once attempted to erect a fence on the California-Mexican border.