It’s nearly the end of 2011, which means many magazines, websites, blogs and STD pamphlets will publish the top 10 whatevers of 2011 (heads up: gonorrhea was huge this year). I do not want to be like a child getting left behind due to poor policies like No Child Left Behind so I am also coming up with my top 10 whatevers for 2011. Today’s feature is the top 10 movies of 2011.

Here’s a teensy tiny glitch….I have only seen three movies this year. This may seem like an insurmountable problem, but as Sarah Palin once said “Ignorance only makes you stronger” *wink* so I am as strong as a prairie dog. I have no idea what a prairie dog is, but my gut tells me it is the strongest of the dinosaurs.  And more importantly, you don’t like this list than you pal around with terrorists.

1. Harry Potter and the Deathly Hallows Part 2 – This one was particularly fantastic because I actually left my house and saw this in a movie theater. And I didn’t have to listen to a baby monitor throughout the whole thing. And it was good! If I had actually seen 10 or more movies this year, this likely would have still made the top 10.

2. Bridesmaids – This one I saw at home. There was a baby monitor playing in the background and I really struggled over committing two hours of my evening to this when I could be sleeping or….yeah sleeping is pretty much it. But this makes my top 10 because it was one of three movies I saw this year, and Wilson Phillips sang in it and that made me think back to the time when I was young and thought I had a future.

3. Horrible Bosses – I saw this at home too. The magazines and websites led me to believe that this was a raucous comedy, and I believe many writers confused the word “raucous” with “one-note.” I love Jason Bateman. I love Charlie Day. But I did not love this movie. It is in my top 10 because it is one of three movies I saw this year. 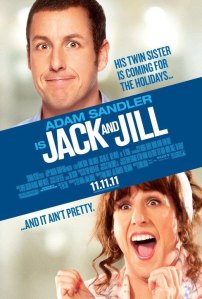 4. Jack and Jill – I did not see this, but can only imagine it is a raucous “comedy.” Adam Sandler plays Jack. Believe it or not, he also plays Jill. How did he do that? He put on a wig and some earrings. Jack and Jill go up a hill to fetch a pail of water and they plummet to their deaths. If this is not what happened, it is what should have happened.

5. What’s Your Number? – I did not see this, but can only imagine it is a raucous, romantic “comedy.” Anna Faris plays a cardboard cutout who learns from a necessary plot point that women who let many men penetrate them will die as used-up prune whores. So she revisits the men she let penetrate her to see if she can marry one of them. Some other guy is in this and he is totally not right for her, but then he is and yet they both die as used-up prune whores. 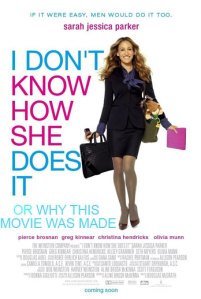 6. I Don’t Know How She Does it Or Why This Movie Was Made – I did not see this movie, but can only imagine it is a you-go-girl chick lit “masterpiece.” It stars Sarah Jessica Parker as shrieking cartoon character who wants to have her job and children, and eat them too. She does–and it causes her to explode.

7. No Strings or Brain Stems Attached – I did not see this movie, but can only imagine it is a raucous, romantic “comedy.” It stars Ashton Kutcher as a greasy porkchop and Natalie Portman as an easy paycheck. The two characters bump up on each other until the friction causes them to ignite their true feelings but also the accelerant that eventually consumes them in a ball of fire. 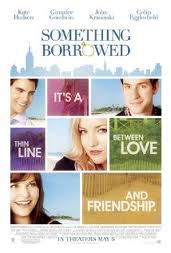 8. Something Borrowed or Another Terrible Movie with Kate Hudson – I did not see this movie, but can only imagine it is a raucous, romantic “comedy.” It stars Ginnifer Goodwin as a Cathy cartoon who crushes on Dex, who happens to be engaged to a Cathy cartoon’s best friend, or cat.  She eats ice cream. The cat shrieks, scratches and takes dumps in a penthouse-style litter box. In the final confrontation, all characters are killed by a Transformer-7: Michael-Bay-Must-Be-Stopped trash compactor.

9. Thomas & Friends: Day of the Diesels – I did not see this movie, but can only imagine it is a searing drama. It stars Thomas, a tank engine, who hears a prophecy from a trio of witches that he will soon be pulling the express line, a job held by his friend Gordon. He alerts his wife, Lady Thomas, who hatches a plan to have Thomas murder Gordon when Gordon stays at their villa on the island of Sodor. When Thomas ascends to the throne of express train, he becomes more and more disturbed by all he has done and is driven mad.