I’d like to begin this post about pages 401-450 of Fifty Shades of Grey with a public service announcement:

Please do not dispose of your tampons in toilets.

I know you might be in the heat of the moment, about to bang on the floor of the bathroom, but please dispose of your tampons in the trash receptacle. Or if you’re banging in a public stall, please use that little trash container that resembles a mailbox.

Why am I bringing this up?

So we left off with Ana hightailing it to her mother’s house in Georgia to get away from Christian’s log ride so she can think about their arrangement with some clarity. If you need to know how we got to this point in the story and hate yourself, you can click here to read previous installments.

Ana’s exodus results in heavy email action. When I read this, I felt like I do at work when someone sends out a mass email about something non work-related like joining a volleyball league, and everyone who replies back hits “reply all” rather than “reply sender” so I have to sift through 45 emails about “I’ll do it” or “Fun! What time?” or “I’d like to volley your balls.” And you feel like replying back “Can you not reply to all of us because no one gives a shit about your smiley emoticons,” but you don’t want to be that person, the one that causes that mass email “Jeez, what’s her problem?” to be sent out, and then you have 65 more replies to sift through. And they’re all filled with frowny faces. 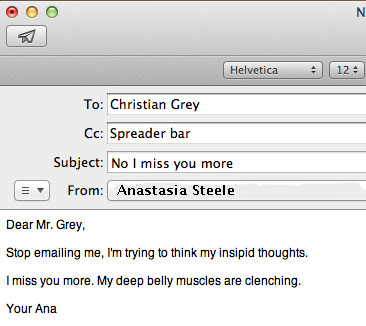 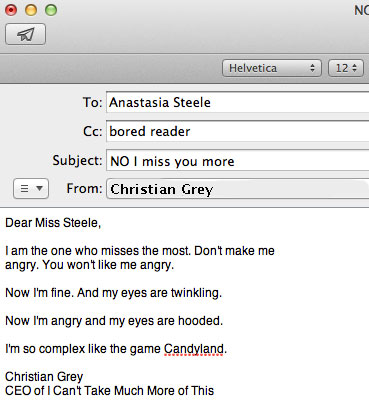 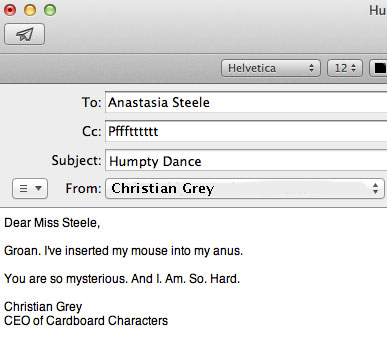 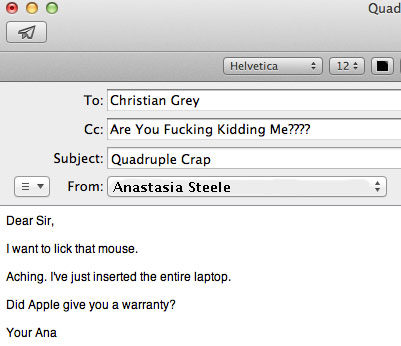 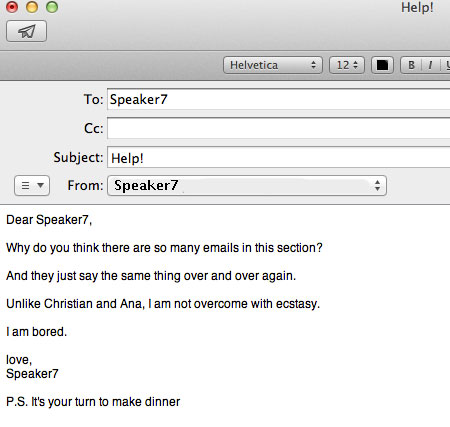 Christian signs off, saying he has to meet someone for dinner, and Ana deduces it’s the woman who made Christian a sex slave when he was 15. Ana calls her “Mrs. Robinson” because she is clever…wait, I’m sorry, I meant the opposite of clever, which is stupid buttface.

She finally decides to Google Christian’s name, which leads to the best line thus far: Holy Cow! I’m on Google!

Yes that is sooo very difficult. That’s why I only got 185,000 hits on a search of images for projectile vomit. You know what’s difficult? Not being on Google.

While out for drinks with her mom, Ana decides to send some more emails (!?!) about her dislike of Mrs. Robinson and how it impacts her down there:

Christian instantly replies “I see London, I see France” and it turns out the reason he can see her underpants is because he has flown to Georgia and is presently in the exact hotel bar as Ana and her mom.

That’s so hot and sweet!

They murmur and pout and grit their teeth and look at their hands and arch eyebrows and glower, and sulk and tap dance and help a Nigerian prince secure freedom, and eventually head upstairs to Christian’s room to add their genital fluids to the walls of the bathroom.

Ana’s on her period. God, I’m so fortunate to know this. Aren’t you? And that’s when Christian pulls out her tampon and flings it into the toilet. Please refer to the PSA at the top of the post.

They then commence the banging. Before he mounts, he likes to say “I’m going to have you ______” and then adds the location. We learn that his member is covered in her menstrual blood…that is my little early Christmas gift to you. Now I’m going to throw up off the porch and have someone snap a picture so it can be added to the projectile vomit archive. Holy cow! I will soon be on Google! 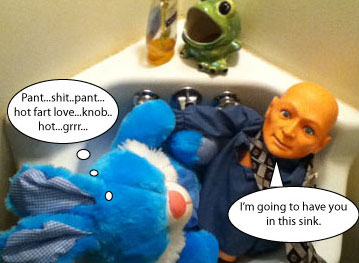 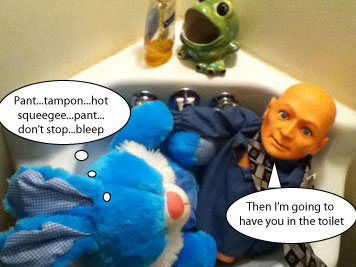 After all the sexing, Ana feels she needs to get to know Christian better. “What’s your favorite film?” she really asks him.

The section ends with them about to go gliding–hopefully directly into a ravine.

Only one more recrap to go!

ABC premiered its new sitcom Work It last night. Work It is about two men who dress up as women and pee at urinals. I learned this from an ad in People magazine, which showed two men dressed as women peeing at urinals. Hilarity ensued…..somewhere else..very, very far away from this show.

I felt I gleaned enough from the promotional ad and my childhood watching Bosom Buddies to write a review 38 minutes before the show premiered. I added changes in red after I viewed the show, dry heaved in the carport and rubbed a cheese grater on my face to feel something other than blackness.

Opening theme song….RuPaul song, maybe Cover Girl? The two male leads gyrate on one another while struggling to pull up panty house. Hilarity ensues…..somewhere else….very, very far away from this show. Actually my opening was better. Dude 1 or Lee comes home with his pockets full of sugar, soy sauce and ketchup he stole from his latest job interview. His wife expositions how it’s been a year of unemployment, his insurance is almost out and it’s time to get a physical and “don’t compare a prostate exam to the pinball rape scene in The Accused.” I did not make up that line, someone was paid $250,000 to do so. God Bless America.

First scene – Dude 1 remarks to Dude 2 how easy women have it. “They just have to spread their legs and bingo job promotion! Even when on the rag.” The female (of course) boss overhears and fires them both on the spot. The audience saws “awwwwww!” and commits mass suicide. Another studio audience is brought in. This time, they are searched for any weapons or objects that can be turned into weapons as a precaution. Spot on. Lee, his friend Pedro and “comic relief” Toad man sit at bar. Toad man says “It’s a Man-cession. Women are taking over the work force. . . They’ll keep a few of us around as sex slaves…but not the good kind of sex…the sex with kissing and cuddling.” The person who wrote that makes more money than all of us.

Second scene – Dude 2 is sleeping on the couch, covered in want ads. He farts. Very close…Lee is at the doctor’s being raped on a pinball machine. He violates HIPAA as he listens into a dumb blonde’s conversation about how much work she has a drug rep. “In fact, we’re hiring,” she tee-hees. Oh, but not men because men are discriminated against in this society and also because “doctors like to nail them less. Tee-hee.” Lee also finds he has to pay $900 for his pinball rape. Where am I going to get that money, he thinks followed by Waw-wawhhhhh.

Third scene – Dude 1 is at a job interview. The potential employer says “Jeez, your resume is perfect, but I’ve got to fill a quota. You know how it is?” A whoa-is-me sound whistle plays. Lee rummages through his wife’s jewelry box and finds earrings. He plans to sell them until he catches sight of his head in a mirror just above the neckline of a horrible dress that is no way his wife’s because it’s size man-with-linebacker-shoulders. He places the earrings to his ears and quick cut to Lee in a different man-sized woman’s suit and wig. He is waiting for a job interview. Tampon joke. Mine comes later, darn it. Should have used it sooner.

Fourth scene – Dude 1 meets Dude 2 at Hooters. Dude 1 says “Man, I can’t find a job because, man, I’m a man, man!!” He pounds his fist on the table overturning a bowl of hot wings. Dude 2 farts loudly and asks “Are you going to eat that?” pointing at the chicken wing that landed in Dude 1’s crotch.  A lightbulb appears above Dude 1’s head: “Hey, I’ve got an idea!” I rub the cheese grater against my eyeballs and scream into a pillow. Meanwhile, Lee is being interviewed by a beautiful woman boss. He impresses her with his ability to name drugs and their side effects, e.g. [Work It]  causes anal fissures. “Wowza!” says woman boss. “Most of the girls think clinical trials are something Lindsay Lohan goes to!” And I run out into traffic thereby missing the rest, but here’s what should have happened:

Cuts to fifth scene – Dude 1 and Dude 2 are in Dude 1’s bedroom trying on bras. Dude 2 says “Sometimes I have that not-so-fresh feeling” and snaps Dude 1’s bra straps.

Sixth scene – Dude 1 and Dude 2 are in a waiting area dressed as women although they look so unlike women that they make Adam Sandler’s drag in Jack and Jill feel like The Crying Game. The employer walks by and eyes Dude 2’s chest. “She’s hired!” he yells as he does a cartwheel and mimes jacking off. “Not without my friend,” Dude 2 says breathlessly sticking his chest in employer’s face. “We’re a team.” The studio audience says “Ooohhhhhh!” and strangles one another. Another studio audience is brought in. This time, they’re handcuffed.

Seventh scene – Dude 1 and Dude 2 are gainfully employed as stockbrokers or pharmaceutical sale reps (I was right!! I’m a genius even though I have ovaries!!) or car mechanics or pimps or congressmen or some other professions where women are 1 percent of the work force. They go to the bathroom. Dude 2 almost enters the men’s room, but Dude 1 pulls him by his bra strap into the women’s room. While in there, another woman is hemorrhaging in the stall. She begs Dude 2 to help her insert a tampon (should have been earlier). A making-whoopie whistle sounds while Dude 1 vigorously shakes Dude 2’s hand. “I am woman. Hear me roar,” Dude 1 yells, thumping his chest so vigorously that he pops out a falsie.

Eighth scene – Employer appears at Dude 2’s desk with flowers and candies. “I think you’ll find the best gift here,” the employer says gesturing to his crotch. “This will really make your hedge fund/sales/carburetor/whore/legislative bill run smoothly.” “I’m a lady,” Dude 2 says. “And I don’t stand for that kind of talk.” The studio audience members try to applaud, but their hands are still handcuffed so they pound their heads onto the back of the seats until they knock themselves unconscious. A new studio audience is brought in, handcuffed and helmets placed on their heads.

Ninth scene – Dude 1 and Dude 2 in dude clothes drink beer at a dive bar. “I think that went well, but next time I won’t use that entire bottle of Massengill,” Dude 2 says and farts a hole in the bar stool. “Lucky you,” says Dude 1. “But I’m in love with that woman who almost bled to death in the bathroom and I nearly gave a bj to the boss.” The studio audience tries desperately to kill its collective self, but with no luck instead enters a catatonic state, which is the exact state I entered at the conclusion of the show.