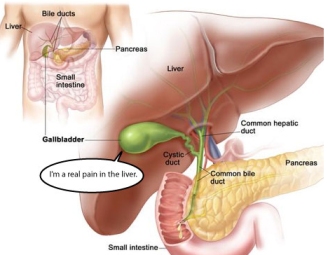 Little known fact in the history of Speaker7, but a week before my tonsillectomy I had a HIDA scan. I was crammed into a tube, filled with helium and then twisted into a horse balloon for a child’s birthday party. The scan showed not only a propensity for breakdancing, but a nonfunctioning gallbladder.

For awhile, I had been experiencing what I’ve medically termed as “shitkickers”–meaning I felt the shit was being kicked out of me. I would sit up, and it was as if the skin under my ribcage was going to rip apart. I figured I’d either had hernia or was about to give birth to an alien baby à la John Hurt.

Nope. It was just my gallbladder yearning to be free. I began to grow suspicious of a romantic relationship between my tonsils and my gallbladder. 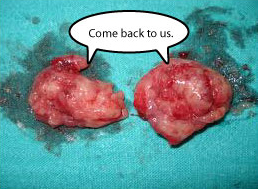 I postponed the surgery because it’s really out of style to have a breathing tube inserted twice in a season (source: “Who Wore the Breathing Tube Better?” US Weekly).

But the shitkickery continued. I remember trying on shoes when the onset of an attack started, and hoped the shoppers would politely ignore me as I crouched and gasped on the floor for a few minutes. I explained I was a foot fetishist.

This past week, it became even more apparent that we could no longer live together and one of us had to move out. Every morsel of food became the equivalent of eating a Thanksgiving-style banquet of Big Macs encased in Doritos taco shells covered in KFC grease dribblings. My abdomen turned into its own flotation device, and I told my gallbladder to find new living quarters.

So yay! Another surgery. I can’t wait to see what will go next. I’m banking on the brain.

As to be expected, Hugo is thrilled.

Oh–I’ll have a new post up at The Official How To Blog tomorrow about the Game of Thrones. I’m figuring I will be too hopped up on pain medication to promote it.

1. Research tonsillectomy on the Internet and read posts by people written five days post-surgery. The person who had an easy go of it is not busy posting his easy-peasy experience on the blog. He’s not going to make time to write “This was such a blast, I’m getting another set of tonsils put in so I can get them taken out again 😉 ” He’s too busy enjoying his life.

No, the person who is posting is the one who feels like she’s asphyxiating on her tonsil scabs whenever she’s not sipping Gatorade. “I haven’t slept in days. If I don’t drink, it feels like I swallowed 400 jalapenos doused in lava. My teeth have started falling out like I’m the fucking Fly in David Cronenberg’s film.” And this person is topped by the next poster who says she wishes it felt like 400 jalapenos doused in lava. “That would be picnic in the park compared to my agony. Try 7,000 ghost peppers coated in napalm.”  She claims lying down will bring about her immediate death.

You contemplate buying this:

But opt for a Lazy Boy recliner instead.

2. Purchase a Lazy Boy recliner at an actual Lazy Boy recliner store. You would think this would be a simple transaction. You point to the chair you want, you pay some form of compensation, you leave with the chair. You believe you will avoid asphyxiating on your tonsil scabs and you will not have to wear something that resembles the cone dogs wear after surgery. 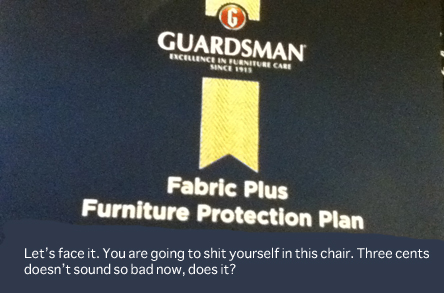 In the time that passes, you could have likely built a chair, destroyed it with an exploding pen and built a replacement chair. You realize you filled out less paperwork bringing home a small human from the hospital.

3. Use an exploding pen. Especially while sitting in your new Lazy Boy recliner that lacks a Guardsman furniture protection plan. You thought it would be a good idea to get your will in order since you are undergoing a surgery that causes everyone to bleed profusely from their gaping tonsil-less craters. You want to make sure your blog is taken care of in case of your inevitable demise from reading too many tonsil horror stories. Then your pen explodes and you think why me? But you don’t write this as your status update on Facebook because you fucking hate enigmatic status updates.

4. Write enigmatic status updates on Facebook. Seriously, who do you think you are? Erica Kane?

What the fuck does that even mean? And now you have a sudden interest in this person who you barely know and only accepted her friend request because you shared a math class 20 years ago. You are so riveted you check back on Facebook frequently to see if there’s any updates.

Oh my god, you wonder, what rilly did happneded between them? By this point, 12 people have commented “What’s wrong?” or “Stay strong, girl.” Hmm.

Then she hits you with this:

Wowza! Wowza is right because eight hours have passed. Eight hours you could have used to search the interwebs to find out how to clean tonsil-crater blood off your new non-Guardsman Lazy Boy recliner. Damn, the tonsillectomy blog recommends Guardsman.

5. Go on the Internet for anything.

In a few weeks, I will be saying goodbye to my tonsils.  They will move out of the space in the back of my throat that they have been living in rent-free all these years, and take their reoccurring infections with them.

“Just for the record, I hate you both.” – Speaker7

Frankly my tonsils have been acting like giant a-holes with the emphasis on the giant. If this country worshipped giant tonsils rather than giant breasts, I would be regularly featured as a Playboy Tonsilmate.

For the past three years, I have felt like I’ve had popcorn kernels lodged in the back of my throat, and I don’t even eat popcorn. The glands in my neck have swollen to a point that they could appear in the Macy’s Thanksgiving Day Parade, and people would say “There goes two of the largest balloons I have ever seen.” And I am responsible for the influx of peed-out antibiotics in the local water supply.

I know the recovery is going–to put it bluntly–suck a huge tonsil stone. But I am at the point where I’m ready to take them out myself with a spork.

I find that now people know of my impending surgery, they find it of great import to tell me their own personal tonsillectomy-horror story. I’ve been regaled with tales of throwing up blood and post-anthesia paralysis. I’ve been told that yes, the person had them out as a child, and yet the person remembers it as the most vividly horrifying experience of the person’s life.

I do because I’m going to have my tonsils out in less than three weeks.

So please, by all means tell me:

I had my tonsils out and I threw up so much blood, they had to give me all new blood and then my head fell off.

I was scheduled to get my tonsils removed and the doctors accidentally removed my larynx instead. They replaced it with the mechanical voice box of a talking Barbie. Math class is hard. Tee-hee.

I had my tonsils removed and now I can’t stop scatting. Zoop-de-flee, zoop-de-fly.

I had my tonsils out and they went on to win The Voice and refused to get me into the after party.

I had my tonsils out and now they’re seeing someone else and have even proposed. What does that person’s throat have that mine doesn’t?

That one especially hurts. Get it? Get it?

If you don’t believe, just tell someone you’re getting your tonsils removed.