As a rule, I try not to be drunk when I look at Facebook.

I have found it leads to stupidity, like, “liking” someone’s status –“It’s wine o’ clock!”– because in your cabernet-haze, that sentence is better than poetry.

It also frees me up to have feelings I normally suppress in order to exist in society; mainly anger and there’s quite a bit to be angry about.

As you may know, the U.S. Supreme Court made a supreme decision that affects more than half the population who have those whore parts. The majority opinion was written by Justice Samuel Alito to get back at the girl who rejected him in high school.

I’ve read a smattering of articles on this because I’m trying to avoid a rage stroke. My understanding is a divided Supreme Court continues to believe corporations are people much in the same way my 4-year-old son believes his monster truck has feelings and is allowing these “people” to use made-up religious beliefs in order to deny some forms of birth control for real people who actually possess human-like vaginas. 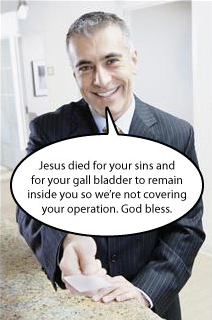 That decision, as Justice Ruth Bader Gingsburg so eloquently put it, sucks balls.  Some Facebook “friends” took to Facebook to vent their outrage over this decision. They then posted a picture of their mojitos with the caption: “It’s Mojito o’ Clock!” and that sentence was better than an employer-covered Plan B pill.

I’m a little tipsy at the moment.

And then one “friend” posted this:

My immediate pinot-noir-fueled idea was to respond in this manner:

Social media is ripe for this sort of thing. In fact there was this whole article about in Sunday’s New York Times. We relish in the rage of strangers and become willing participants, each piling on his or her own vitriol until we transform into a community of Yosemite Sams.

I erased the “um. . . fuck you” and tried for logic instead:

I figured this response would take in the “minefield” the ruling created, but, as the article rightly points out, social media is not a place for nuanced discussion about controversial issues. Short, snippy quips are preferred.

I ended up not doing anything because life is meaningless, amirite? Up top!

Good thing too because that article points out that those who frequently vent Internet rage are in general pretty angry people in real life.

You know the type. They’re the ones who would put corporate profits over women’s preventive health care.