Donald Trump may seek the GOP nomination for govenor of New York.

This is news, people.

In the same way, it was news when Donald Trump declared he was running for president those 4,001,321 times. Or when he fashioned that ridiculous hair mop he wears on his head from wood shavings and a can of KRAFT® Easy Cheese.

The frequent-bankruptcy-filing “billionaire” says he is considering running because he believes he can win.

Trump was at some Republican fundraiser on Friday to  prove that a person can still communicate even when it’s clear one’s brain is disconnected from one’s spinal cord.

I’m not a fan of Gov. Andrew Cuomo. I voted for him only because the other guy wanted to convert prisons into “welfare dorms.” Now if Trump seriously gets the nomination, and that is a big bloated if, I will once again be forced to cast a vote for a politician who routinely denigrates my profession as an educator–as if we are all educators at Donald Trump University.

At the $100-per-person event, Trump outlined his platform. He would turn New York into the energy capitol. He has volunteered to act as the state-wide gas bag. He supports hydrofracking and wants to repeal the NY SAFE act, which requires ammunition dealers to do background checks and the creation of registry of assault weapons. It also requires mental health professionals to report credible threats made by a mental health patient.

Trump stated that he himself is licensed to carry a gun.

I wonder if I can find that number to make a report.

More importantly Trump touted his number one issue–how to stay relevant beyond his woman parade pageant and his nonCelebrity Apprentice snoozefest.

Bob Morris is sorry, you guys.

He is deeply sorry. He is so so sorry that his letter calling the Girl Scouts of America a lair of anal-lovin’, communist-sympathizen’, abortion-havin’ Planned Parenthood lovers made it out of his protective lair of non anal-lovin’, non communist-sympathizen’, non abortion-havin’ Planned Parenthood haters, otherwise known as Republicans.

He is not sorry, however, about what he said. The Girl Scouts are in cahoots with a group that represents the “biggest evil of our time.”

My sources say this sentence was also included in Bob’s non-apology apology letter: “Now when I made love to that sheep, I did what was right, I did not use protection.”

It’s there. I don’t care if you cannot actually see it.

It’s the same way Bob doesn’t care that both Girl Scouts and Planned Parenthood have said “We don’t know what the f— Bob Morris is talking about in his letter, but it in no way reflects reality.” Bob is still like “La la la!! I can’t hear you! I CAN’T HEAR YOU!!  Look at this picture of me.”

"Don't I look like someone who has a clear grasp on reality?"

Bob includes a link to the World Association of Girl Guides and Girl Scouts. It shows a picture of 14 girls under the heading “Young People Advocating for Sexual and Reproductive Rights.”  This was taken at some UN Conference on the status of women in the world. This is the smoking gun. But it’s not as good as this picture:

"I'm a 100 percent positive that Dolly is not a Communist."

This picture was taken at an awards ceremony where Bob received the most coveted award one can receive, Turd of the Week™. 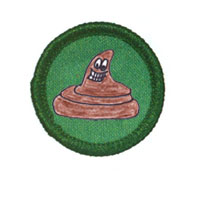