Hold onto your bonnets, ladies–the Mommy Wars are back.

Your first question might be: What if I don’t wear a bonnet?

Good question. In the case of non-bonnet-wearing, grab the nearest lady item like a box of Massengill or a DVD of Sex and the City II. Now hold tight because the Mommy Wars are back.

What are the Mommy Wars? you ask.

Oh, you sweet, sweet little woman bird or you precious man bird, if you’re a guy and have continued reading past the Massengill reference. Let’s get educated!

Um…okay, I should admit that I know dick about the Mommy Wars. But I am a librarian, which means I can shush with the best of them, and I had a baby cut out of my uterus, which means I can classify myself as a mommy. Still you might want to head to some Mommy blog or to your actual mommy or watch Mama’s Family to learn the rich history.

You’re still here? Fine, let me search the databases, archives and primary documents (this sounds so librarian-y™ but really I’m just looking at Wikipedia), and let’s take the wheels off this bus. They ain’t goin’ round ‘n round no more. And if that driver tells me to “Move on back!” Mommy’s gonna cut a bitch. I hate that goddamn song.

Okay so the Mommy Wars began when a stay-at-home mom and working mom got into a cat fight over which type of Bounty cleans up spills better. It was vicious, and by the end, over 200 rolls of Bounty quicker picker uppers were needed to soak up the bile.

Blogs and books were written, mainly about rich women’s struggles to have it all or to have it all–while giant corporations continue to put shit in our food that will eventually cause our total zombification.

Things seemed to die down until in February, Gwyneth Paltrow told a magazine “I’m rich and successful, and I told someone you have to compromise to be a wife. Now I’m going to jet off to Italy.” Many people said “I didn’t read that, what did she say? Yeah sorry, wasn’t listening even now.”

Okay so the Mommy Wars flared up yesterday when some rich lady threw a verbal grenade at some super rich lady. The rich lady was like “bitch doesn’t work ever” and the super rich lady said “Butler, hold my calls because I’m gonna push the nuclear button and destroy all humanity. Or I’m going to tweet I’m a stay-at-home mom to five boys, that’s hard work. . . oh and my Mittens is doing kind of shitty with women in the polls because of the shitty things his political party does and says so thanks for turning the focus on this issue.”

This caused mass hysteria. The #IWantToEatJustinBiebersHairpiece was knocked from its number one trending perch. Some person hyperventilated on TV. Another Republican said we need to respect a woman’s choice and then laughed hysterically.  Someone made this travel mug: 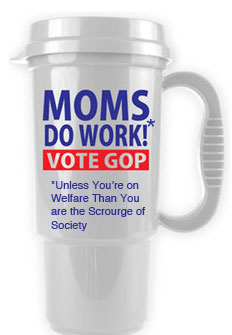 The country quickly divided into two camps: Those who make millions in politics and media, and those who don’t give a shit. I am in the latter. That’s why this post ends now.

Giving birth is hard, but I found raising the actual child harder. I had certain expectations.

The reality was a little different–especially in the beginning. In the first few weeks, many people come by your house to coo at your baby. This usually happens when you’ve just begun nursing. It’s typically your father-in-law or father. These are the fun moments.

You change a lot of diapers. You cannot believe someone so small can produce the waste of an entire elementary school on a single day. You keep track. Since you’re breastfeeding you have no idea if the baby is getting enough to eat. You begin to realize that you have one hour and 20 minutes between each 40-minute-bouts of nursing when you can be something other than a food source. These are the even funner moments.

I think I suffered from postpartum depression the first two months of my son’s life. My therapist at the time said I had adjustment disorder in order for me to submit my visits to my insurance provider. It was a very lonely time. I remember distinctly my mother showing me an picture of my baby on her iPhone and me just wanting to be left alone so I could watch Dancing with the Stars.  In my defense, it was the episode where Kate Gosselin stomped around to the song “Paparazzi.”

It was in these profoundly sad moments that I turned to tabloid magazines for support. And wouldn’t you know, a “celebrity” could articulate exactly what I was experiencing.

It was like she had a window into my brain when she discussed her decision to breastfeed. Anyone who says this is a natural, beautiful process has blocked out the first two months when neither participant knows what the hell to do, and where you wish you could do something gentler to yourself, like rub sandpaper on your nipples and coat them with lemon juice.

Kendra, like many mothers, worried about her ability to nurse with Triple D implants. It was like Kendra channeled my own thoughts when she said: “Right up until I went into labor, I was like, I don’t want to breastfeed! Then the baby came, and I was like, Ooh! I want to breastfeed!”  I might have even said those exact words.

In two sentences, Kendra perfectly encapsulated the internal struggle of nursing vs. formula.

And as difficult as the decision to nurse was, it was nothing compared to the sadness Kendra felt. I, too, felt trapped and overburdened. I felt like I had nothing to look forward to, that my life would forever be an endless cycle of diaper-changing, feedings and CNN-watching. Kendra recounted the story of a visit by friends a few weeks after giving birth. Her words were like a lifeline:

“It was bad timing. They were really hot and had really nice bodies.”

Thank you, Kendra, for explaining why I was feeling so hopeless and forlorn.

And the story ends well for both of us….I no longer want to get in the car and drive as far away as possible from my son…and Kendra consumed Abdominal Cuts, a weightloss supplement filled with conjugated linoleic acid, to get her body back in shape. Win-win.