Today I am hosting my first-ever guest post. I don’t know why I’ve never done this before because you do barely any work and reap all the glory. This is what it must feel like to be in top management. Anyhoo, my first guestblogger is Angie Z. of Childhood Relived. Here are things you should know about Angie Z:

I was honored to be asked by Speaker7 to write a guest post for her today.

So today I thought it’d be fitting if I offered a recrap of my own.  And since I write a childhood nostalgia blog, I thought I’d recrap a children’s book to give it my own flavor.  I’ve selected Curious George Goes to a Chocolate Factory. 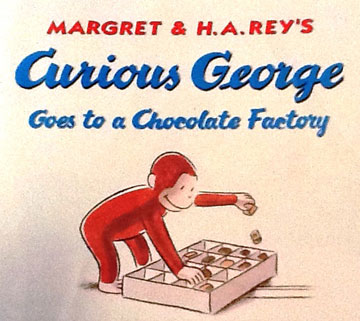 Curious George is less monkeyish and more chimp-like and therefore doesn’t wig me out like most monkeys – but he annoys the hell out of me.  And every time my kids bring me his books to read, I feel it’s my duty to first offer them the medical textbook photos of the monkeypox virus and then show them the most watched YouTube video of all time, a monkey sniffing its own fecal odor before contentedly passing out against a tree.

In every Curious George book, George wreaks havoc on the world.  People get hurt, things are broken, dreams are destroyed.

Someone always gets mad at George (and reasonably so) for all the stuff he’s screwed up.  And then someone always rushes to George’s defense and says, “But this monkey is the one who saved everything!”  And then everyone whole-heartedly agrees that George is a hero.  And then the Man with the Yellow Hat comes out smelling like roses, despite that he’s the one who recklessly abandoned his monkey in a train station/library/air control tower/strip club with no regard for human life.

Expect more of the same in this book.

In Curious George Goes to a Chocolate Factory, the Man with the Yellow Hat is obviously high as a kite and jonesing for chocolate.  With George in tow, he decides to stop at a chocolate factory to satisfy his munchies.  What could go wrong? 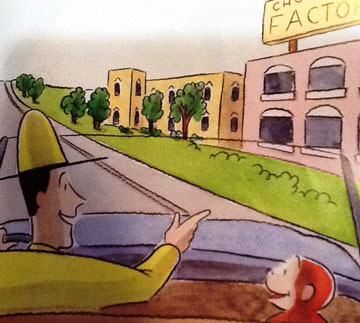 While watching through a window with the other factory visitors, George spots his favorite chocolate on the conveyor belt – banana cream.  And for one fleeting second, I feel a Darwinian kinship to George – like he’s not so bad, like our DNA is more similar than I’d let on.  Because I’ve never once run across a banana cream among the nutty nougats and oozy garbage typically found in a box of chocolates.  And I’d argue that artificial banana flavor is the best artificial flavor of all time, beating out (1) artificial coconut, (2) artificial pistachio and (3) artificial bubble gum.  Indeed, this is a cause worth fighting for, George. 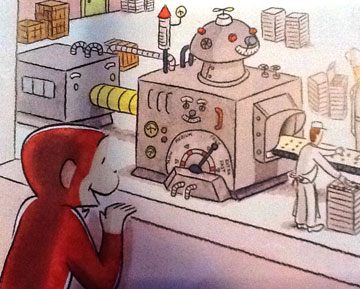 George enters the factory to get to the banana cream chocolates.  He begins eating them off the conveyor belt while the workers obliviously walk around him as if he’s camouflaged by a monkey-shaped chocolate suit.

But then – surprise, surprise – while reaching for a chocolate, George accidentally steps on the lever that speeds up the conveyor belt. 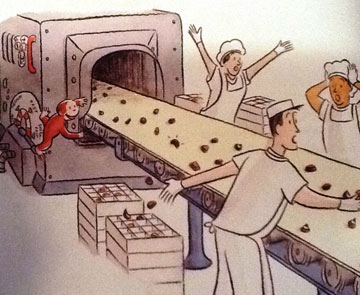 Chocolates fly off the belt.  Workers panic and cause a stampede.  A man is crushed to death in a gear collision.  Chaos ensues.

To play the hero, George jumps in and quickly puts the chocolates into boxes before they fall onto the floor.  He saves the chocolates, everyone!  Thank you, George! 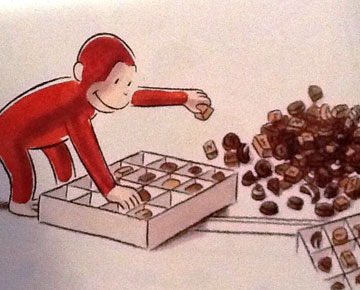 Okay, pop quiz time.  Which would you rather have mixed in with your box of chocolates?  (A) Factory Floor Dust.  (B) Monkey Anus.

Trick question.  The correct answer was (C) Anything But Monkey Anus. 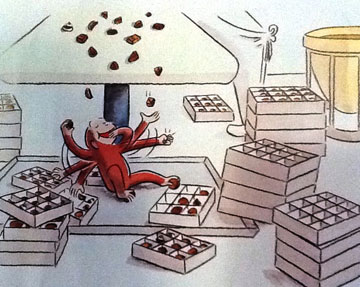 Of course, just as disaster is diverted by George, the Man with the Yellow Hat returns from his three-day drug binge with the innocent look of someone who’s played no role in causing an industrial holocaust.

Of course, the factory workers are so grateful for George’s “help” that they reward him with a box of chocolates. 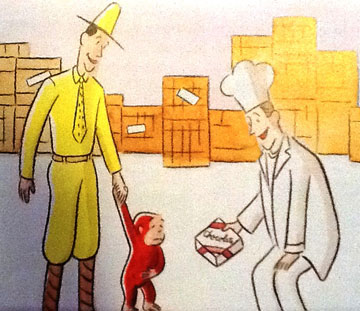 George can’t eat a single one.  He groans and rubs his tummy that is now full with banana cream, his own feces and the mites he’s picked off the Man with the Yellow Hat.  He waves the chocolates away with his hand, which I interpret to mean, “They don’t taste as good when they’re not stolen.” 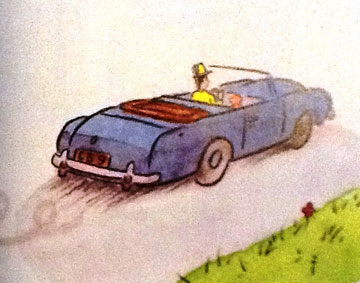