One should never indulge one’s doppelgänger.

She still bothers me though. She insists that I let my readers know when she publishes a blog. She whines in a way that would make Fran Drescher’s voice sound like Vivaldi.

So I’m letting you know, she published a post.

She said anyone who reads it can take the image posted below and use it as a screen saver: 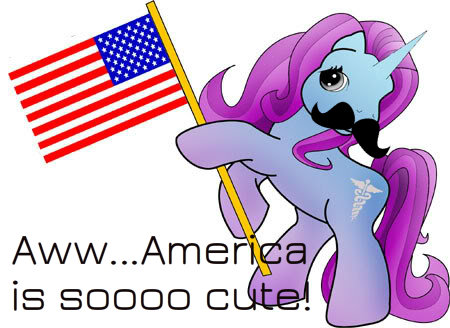 She is diabolical. Because America is soooo cute. 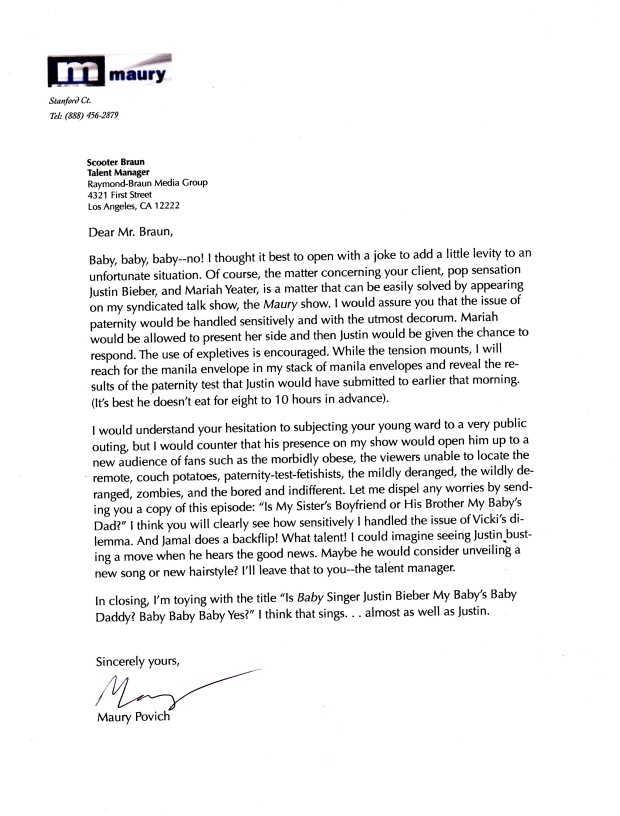 My life is full of regrets.

I was thinking how much I do not want to be on a bed of death, lamenting all the things I should have done, but didn’t.

I never did find out the answer to that question.

Today’s Maury did not pose a question, but a statement of fact: “The tests will uncover your deep dark sex secret.” I would get my answers today…well, not to Vicki’s dilemma–that will forever haunt me–but the answers to some of life’s greatest mysteries.

Deep Dark Sex Secret #1: (editor’s note: this actually could be deep dark sex secret #17 or #1,825 because Speaker7 missed the first six minutes of the show. Regret.)

“She was more like a beauty queen from a movie scene. . . but the kid is not my (daughter)”

Kristina has two children with her husband David, but David doesn’t believe he’s the father of Chantilly because he thinks Kristina cheated on him with her ex-husband Tony.

Kristina is angry. David thinks she’s a cheater. They both tell their stories in a very natural non-reading-cue-card-like kind of way.

I chew my fingernails down to the knuckles……Maury pulls up the flap on his endless supply of manila envelopes….I reach up to wipe the sweat pouring from my forehead…

“In the case of Chantilly,” Maury intones. “David you are the father.”

When I come to, I learn there are more deep-dark-sex-secret uncovering to uncover.

A one-night stand turned into one DNA dispute.

Maria had sex with Andrew one time. Maria screams everything she says as if she is trying to make herself heard over a sandblaster. She screams at the audience to “LOOK AT MY BABY!!!!! LOOK AT MY GIRL!!!!” She screams at Andrew “I HOPE YOUR PENIS FALLS OFF!!!!!!!!”

Maury pulls out the envelope. I get into a fetal position next to the couch.

“In the case of Drucilla,” Maury intones. “Andrew you are NOT the father.”

I began to convulse as a thin trickle of urine puddles next to my twitching body.

I wonder if my system can take anymore deep-dark-sex-secret uncovering when Maury cuts directly to the next story after Maria ran backstage screaming “I’M SORRY!!!!!”

I change my outfit and swallow four Xanax. I go to my happy place in my head as Maury introduces April. April thinks her fiance Walt and her cousin Laureen are having “sex on each other.” She has seen “sex stains” on Walt’s boxers although Walt claims they were just from an accident. Lovely, lovely love.

Maury has the lie detector results. Before he can intone them, my heart seizes in my chest. I can feel a blood vessel explode inside my head. I flop off the couch onto the floor.

I believe I died a few seconds before being revived by Maury’s clear delivery that Walt is a liar. The boxer stains were sex stains after all.

My only regret is that I didn’t DVR it.

The following is an excerpt from my upcoming memoir “Jerry Springer Got Me Pregnant and Maury Povich Will Prove It” which will be coming out just in time for the holiday season in late January. It will make the perfect gift for National Weatherman’s Day on Feb. 5 (screw you, Weatherwomen).

This was August 14, 2003 and my then-fiancé T and I were talking politics and drinking beer at the Hyatt Regency in Buffalo. The city was largely unaffected.

I looked up and saw Jerry enter the room.

T gave me a look as if to say ‘big deal,’ thinking I was referring to an episode of the Jerry Springer Show on the bar’s television. He swiveled around in his chair and caught sight of the trash TV icon.

He talked on a cell phone to some stranger in Michigan who didn’t believe the cell phone’s owner that Jerry was there. I wanted to throw my chair and yell obscenities at the cell phone’s owner as a way of paying homage to Jerry, but I saw none of his bodyguards and it wouldn’t have felt quite right without being restrained by them afterwards. I mumbled a quiet, respectful “I’ll bleeping kill you, you bleeping whore.”

A group of young people holding out pens and folders encircled Jerry. Buffalo was also the destination for Young Democrats attending a Young Democrats Convention. Howard Dean seemed to be the favorite although I noticed a few John Kerry buttons. Of course we all know how well things turned out. But I don’t hold Jerry responsible. I never would.

While Jerry signed autographs and basked in the attention of his admirers, I wondered about Reno. Not the city in Nevada, but a transsexual who appeared on Jerry’s show. It just so happened T and I had watched that particular “classic” Springer episode earlier in the day.

Reno was a woman who lived as a man and had sexual relationships with other women who didn’t know Reno’s biological gender. Reno thought it was best to come clean with Danielle, the woman he had been seeing for two months and recently slept with because he thought Danielle should know.

And what better place for total disclosure than the Jerry Springer Show?

Danielle came out to cheers and took her seat next to Reno.

“Ain’t I been good to you baby?” Reno asked holding onto her hand. “The best you ever had?”

Danielle smiled and said “yes” knowing that since this was the Springer show only good surprises were in store for her.

Jerry handled it perfectly. Usually his golden nuggets of wisdom are saved for the “Final Thought” segment at the end of the show, but he unleashed them left and right, many of them landing squarely on Reno’s ass.

“You have the right to be who you are. . .” Jerry began. I started clapping, a few woo-hoos followed.

“But when you sleep with someone, they have the right to know your gender.”

And then the power went out.

T and I were left to wonder whether Danielle and Reno could work things out despite their differences. If these young kids couldn’t make it work, then who could? I wanted to have faith in love. I wanted to believe that even with deception, mangled English and public humiliation, loved prevailed. I wanted Jerry to tell me.

I knew there was a reason why Jerry and I ended up in the same hotel bar miles away from our respective homes in the middle of black-out and Young Democrats convention. It couldn’t just be coincidence.

I looked at T and bent over to cup his face wondering how he would react if I told him I really hated Indian food although we continued to celebrate our anniversary at the Indian restaurant where we had our first date. If Reno could offer full disclosure to Danielle didn’t T deserve the same?

“Ain’t I been good to you baby? The best you’ve ever had?”

I stumbled over to the crowd surrounding Jerry. I felt I could get closer by body-slamming people. Finally I was face-to-face with my hero, and then my mind went blank, my vision blurred. I squeaked out “Reno?”

“Reno. What ever happened to Reno?”

Jerry studied me a moment and said “I think the power outage was mainly limited to the northeast. Thanks for watching.”

And then he was gone, swept up in a tide of Dean supporters.

I turned and T was beside me.

I was disappointed. T said if I cared so much, I could just order a copy of the classic episode and find out the ending that way.

I wanted to believe that Danielle and Reno were sipping pina coladas and laughing about how Danielle called Reno “Fuckin’ disgusting” on the show.

Who hasn’t asked themselves that very question at least once?

So Vicki slept with Jamal who is her sister Sara’s boyfriend, but she also slept with Dominque who is Jamal’s brother, and someone’s sperm connected with Vicki’s egg, which is where we get the succinct title for today’s Maury. Maury Povich has an endless supply of guests who find themselves in this predicament and an endless supply of manila envelopes in which to store the paternity results.  There is yelling and pointing. There is bleeping of words. There is a video feed of a small child who deserves his or her own episode  on Maury titled “Are These Really My Parents? Jesus Christ.”  There are sometimes back flips. It is “incredible” and “shocking” according to Maury, but probably not in the way he means.

In a pre-taped interview Sara comes to this realization: “I need to know if my niece is my boyfriend’s baby.” Yes.

And that is where we find ourselves now, waiting for Maury to reveal the results. Will Sara dump Jamal (Maury made sure to ask that. It’s too soon to say, says Sara)? Will Jamal punch Dominque? Possible. Will someone yell? Yes, there is always the yelling. There are also either one or 23 other couples in similar predicaments in this episode, but the yelling has caused them to blur together into a mess of lost dreams and unopened condoms.

And we will have to continue to wait because Maury is milking a second show out of this tomorrow. Here is my guess: Everyone loses.