Who will play Ana Steele in the upcoming Fifty Shades of Grey movie?

This is a very powerful role. Ana is the most beguiling, charming, strong, intelligent, and ambitious woman on the planet.

Wait…what the fuck did I just write? (Thanks Le Clown for freeing me)

Christian Grey says those adjectives a bajillion times in the trilogy, but in no instances do we ever see these qualities in Miss Steele. (To read my recraps, click here) Instead we know that Ana is always “wet and ready” and she can come on Christian’s command, and she reads, and she is a brunette, and, she thinks “Holy crap” ad infinitum, and she judges other women, and she thinks Christian only likes her because he’s “fifty shades fucked up” and she sometimes walks around with vaginal balls in her “down there.”

A couple of names have been tossed about. (For Christian casting, click here) I believe they are all Emma or Emily, and I believe they have last names that distinguish them. But frankly, they will never do the part justice.*

*Full disclosure: I searched for Ana Steele casting on the Internetz and I fell asleep so I’m making most of this up.

Ana responds to commands and Scooby snacks quite well. It makes one surmise that maybe this actress should take the part: 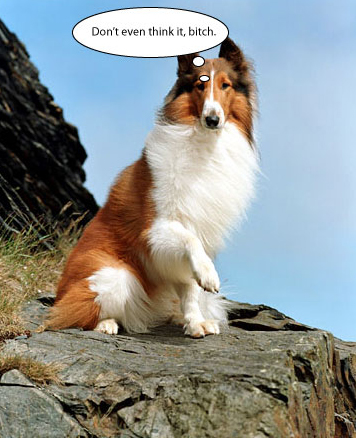 You are right, Lassie. You actually save people–and not with your magical dog vagina.

A dog is a good choice, but perhaps one that is more slobbery and dum. Like Odie from the comic Garfield. Odie continually gets kicked off the table by Garfield, but always comes back for more.

Maybe the ideal candidate is one that is not actually life-like, but truly encompasses the essences of Anabella Steele.

Here are my top five picks

What can one do with a wet piece of bread? Nothing.

4.  A pair of holey underwear. 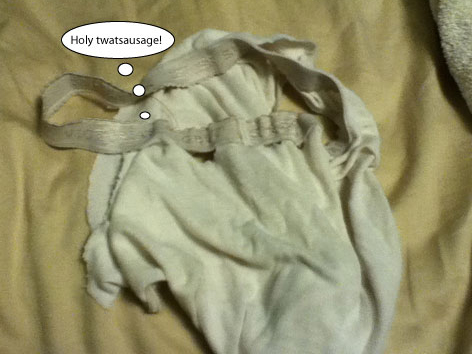 Many times, Christian pokes his fingers through Ana’s underwear and they disintegrate (the underwear, not his fingers). This seems like ideal casting. The underwear is partially gone. It chaffs one’s ass. It’s annoying as lasagna-eating cat. It has no value.

2. The watery stuff that shoots out of the ketchup bottle that makes one curse because it’s gross and who the fuck wants that slimy shit on one’s hamburger.

I call this Ketchup Spooge. The same thing I call Ana Steele.

Yes, Dr. Frankenstein, you have created a monster. A monster you should play. A monster, I think, you want to play. Have at it, you gajillionaire hack.

Next up: brain transplants.