One might say criticizing the president for responding too quickly to Hurricane Sandy is partisan hackery at its best.

But when that critic is the poster child of one of the most botched relief efforts in recent U.S. history, that critic floats to the level of turd superstar, otherwise known as Turd of the Week™.

Michael “heckuva job, Brownie” Brown took Obama to task for holding a press conference the day before the storm hit.

Apparently it’s way better to deal with the mess after it happens. The Bush Administration waited a good amount of time before noticing much of the Gulf Coast was underwater from Hurricane Katrina in August 2005. In fact the day after the levees fell in New Orleans, President Bush was quoted as saying “New Orleans dodged a bullet.” Once they realized things were grim, they responded by not responding. Brown, a former supervisor of horse judges and then current head of the Federal Emergency Management Agency, “led” the relief effort. 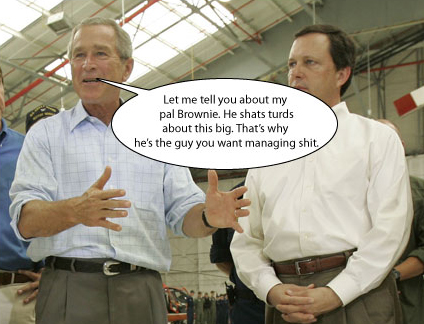 In the storm’s aftermath, Brown, like much of Louisiana, seemed to be in over his head. 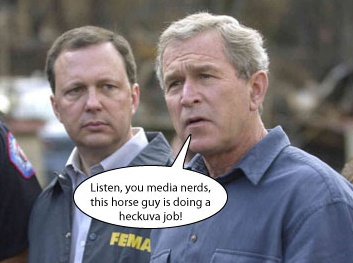 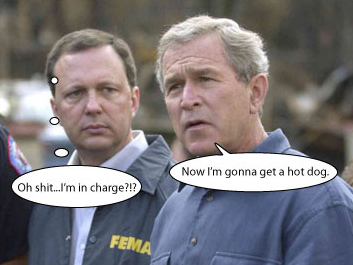 On the day Katrina made landfall, Brown was busy typing “funny” emails to staff, like:

And emails about FEMA attire: 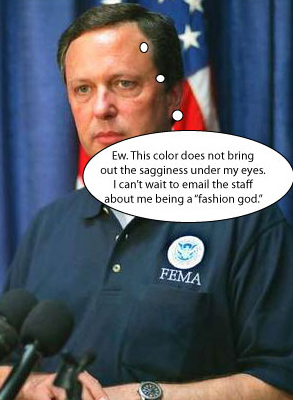 At the Congressional hearings on Katrina a year later, Brown pointed the finger-of-blame at everyone including a little boy scout who was visiting the Capitol for the first time ever after selling the most popcorn balls in his troop. When members of Congress demanded he admit his culpability in the colossal fuckery, he yelled like a two-year-old. 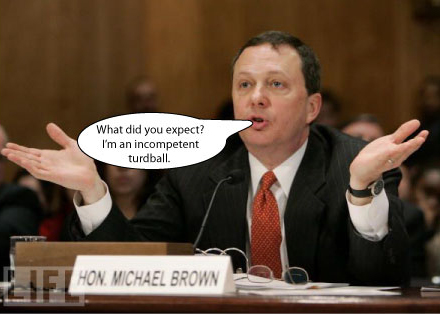 So it makes sense that Brownie should ever speak anything about someone else’s heckuva job since he knows exactly how disaster relief shouldn’t unfold.

Or what I meant to write is it makes sense that he won my weekly turd award because…cheese and crackers, Michael Brown, why the flipping hell do you think anyone wants to hear your take on this? 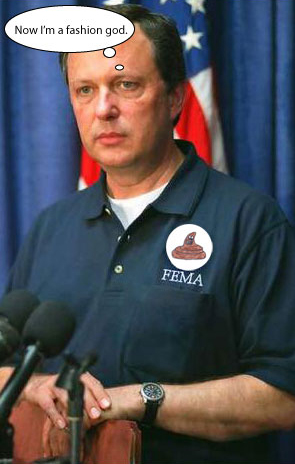 Dearest Reader: Speaker7 is attempting to write a post every day in November so she doesn’t have to participate in NaNoWriMo (National Novel Writing Month). This is the third post. It is a post about turds. There may be many more due to the overabundance of turds. Would you like to read about something other than turds this month? Then leave a suggestion in the comments.