Lots of bloggers have been writing about their plans to participate in National Novel Writing Month or NaNoWriMo this November. Alas, I will not be among them. 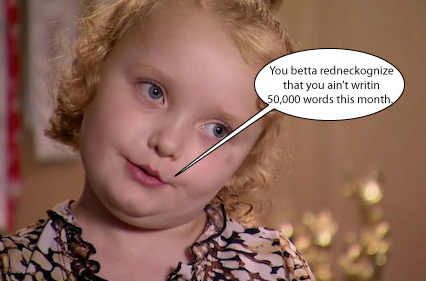 I tried to do NaNoWriMo five years ago. I naively thought 1,500 words a day was doable for me. Trouble is I spent the first few days watching TV for inspiration and began 7,500 words in the hole. I never climbed back out.

But then Jen from Sips of Jen and Tonic–The Greatest Blog on Earth™–gave me an idea. Or rather I stole her idea and hope she’s okay with it. Instead of writing a novel that no one, including myself, would want to read, why not try to do a post a day?

Jen is full of good ideas at all times.

Back during the Civil War when I began this blog, I did write a post a day–sometimes two! And then I petered out and spent my time constructing a mythical land created entirely out of potato peels.

But I think I can do it. Like that little engine who thought it could get up that hill, and then was sucked into a seedy underbelly of drugs and debauchery. I may be confusing it with Charlie Sheen.

I will admit, there will be blog posts that will have more tags than actual words in the post such as this:

As will posts of random clip art.

And there’s a 99.99999% chance I will just reblog whatever Jen writes every day because she’s ridiculously funny, and I ran out of ideas after “Post!”

It is going to be a long month.