I’ve been thinking a lot about the sanctity of marriage. So has this guy. If you can make it past the first sentence, you will learn that God is the author of marriage.  He also wrote the Constitution and the chorus to “We Didn’t Start the Fire.” So God is clearly miffed that man is trying to rewrite His stuff by allowing gay and lesbian couples to marry.

How is marriage to survive?

Fret not, my friend. Marriage is alive and well, as I saw firsthand on last night’s episode of Bridezillas. Last night’s episode featured a sweet wallflower named Suzy who suffers from a terrible condition called Tourette’s syndrome.

Suzy, 19, is betrothed to her one true love Taylor. Her impending marriage is causing a wee bit of stress in the young lass’s life. She tells her mother to kindly “Leave me the f*** alone right now” and “I’ll do your make up. Two black eyes and a bloody lip” and “I’m not going to tolerate you, you old bitch.”

She tries vainly to come up with a proper seating arrangement for the reception. She wants both sets of parents to sit with the bridal couple. The only problem? Taylor’s parents have two small children.

“Kids ruin everything,” Suzy sighs. “I hate them.”

So what else can she do, but scream “I don’t give a f*** about this anymore!” and storm off. Her mother follows in the car, telling Suzy to get in. Suzy’s response is to flip her the double bird. Sugar and spice and everything nice…

There are other beautiful moments like the time Suzy tells her fiance “I hate you right now” and elbows him in the chest. There’s the time she dumps a glass of ice-cold water over the best man’s head at the rehearsal dinner. There’s the one time she addresses someone and does not use the word “F***.”

God’s hand is clearly in the vows Suzy writes for her wedding day. She makes no promises of love or devotion, but tells Taylor she will be just as awful as she is right now for the rest of her life. Masel tov!

I should mention that the show also featured another lovely bride. 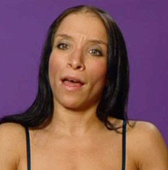 "I am completely awful too"

She drank excessively, popped anti-anxiety medication and repeatedly instructed her fiance not to touch her. Sound advice.

There was more, but I do not have the strength to carry on.

I will let God carry on this blog post for me.

So I was watching the Today show, and after I viewed the requisite segments on the white-women-missing-in-Aruba epidemic and the Jeff-Rossen-sliming-all-over-the-microphone-in-his-best-smarminess perversion, I saw a piece about this 4-year-old who is the world’s youngest preacher, according to They Say. This was so cute. The woman who looks like all the other women anchors on Today except for Ann Curry–I call her “Composite”–she introduced the segment as “this is so cute” so that’s how I knew how to react properly since my initial reaction was to recoil in horror.

They showed footage of the “pint-sized preacher” “preaching” at his “church” somewhere in the country where people speak with Southern accents. He wore a suit and growled about the one Lord and holy God–most of it was incomprehensible–and then he danced a little bit. And…it….was…..so……cute. . . like how it would be so cute to watch a 4-year-old preside over an infomercial on Ab Rockets or be the fifth housewife on the Real Housewives of the Pentecostal Church or be interviewed by Jeff Rossen about being the world’s youngest most off-putting minister.

Thankfully his parents say they’re not pushing the boy to be a preacher and they have no agenda. They said this on the number-one-rated national morning news show where they also promoted the National Geographic special that features their son after the boy gained national attention by his parents uploading his sermonizing on YouTube. That was maybe the cutest thing of all.