I recently learned that The Tooth Fairy has been known to give children $10 for their discarded teeth.

This is insanity, people. Insanity. Why are some of you setting the bar this high?

When you act in this outrageous fashion it diminishes the sense of accomplishment I feel when I discover my child has a pair of clean underwear to wear.

I have no problem admitting that I routinely fail in my role as parent so perhaps I’m not the best to insist on some standard rules of engagement. But when little Timmy’s Easter haul is worth more than the GNP of Uzbekistan, I think we can all see that things have gotten out of hand.

Therefore, I think parents can agree on some basic ground rules.

1. Santa Claus. Can we establish that Santa Claus gives one gift and one gift only? And let it be kind of a crappy gift like tube socks or a box of chalky Whitman’s Sampler. This way the children feel a sort of begrudging resentment to Santa like they do when they have to write a thank you note to Great Aunt Hilda who routinely gives a box of holiday-colored sporks. Then in 10 years, let’s have Santa die in an avalanche so there can actually be peace on earth.

2. Tooth Fairy. $10 for tooth? Seriously? Fuck that noise. I say no money. I say let’s use her to our advantage to scare children into better dental hygiene. I don’t know about you, but getting my 3-year-old to brush his teeth is about as easy as getting Kayne West to stop referencing himself. Let’s instead have the Tooth Fairy leave ominous notes like “Dear little Sarah, I picked up your decayed tooth. If you don’t do a better job brushing, I’m going to come back one night and take them all. Love, the Tooth Fairy.”

This. This right here is how you get a 9-year-old Nathaniel bitching on Twitter about how much he hates his fucking parents for buying him a black iPhone rather than a white one for his half birthday. Let’s scale back a bit, parents, shall we? Does your three-year-old really need a Marie Antoinette-themed party complete with a one-of-a-kind Palace of Versailles bouncy house and cardboard cutouts of disgruntled peasants? No. I’ve seen my son be entertained for over an hour by the simple act of throwing a tennis ball over our garbage can enclosure. Add a cake and that just became the best birthday party in his short life. 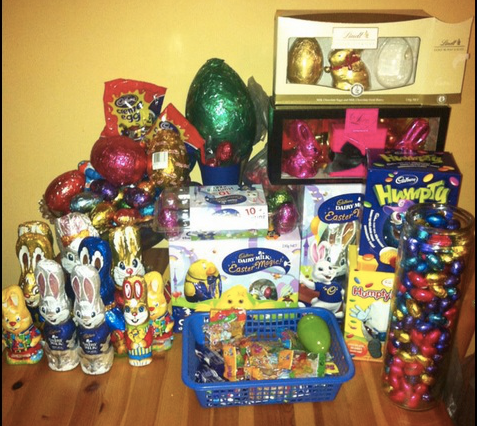 There is no reasonable explanation for buying this much chocolate for one child unless your child is expecting a shiv in the back at the playground and needs some allies. All you’re doing with this display is guaranteeing you will be shelling out $70 to the Tooth Fairy in the near future. Along the same lines as Santa, let’s have the Easter Bunny give one piece of candy and let it be an elephant peanut or a Necco wafer so the kiddies won’t be too upset when the Easter Bunny is inadvertently shot and killed by Elmer Fudd in 2018.

Oh this? This is a “last-minute” Halloween costume idea. Really? Maybe on a planet were a minute is the equivalent of five months. There are many such devious DIY ideas on Pinterest that are designed to set a parent up for failure, and make you wonder where all these other parents have the time to make a DIY DeLorean time machine out of crepe paper with their children while you don’t have the energy to construct a ball from a hunk of dried-out Play-doh. How about we make this easy DIY genius responsible for your failure. Say, if you can’t easily make this, the DIY genius is forced to come to your house and make it for you. Or at least gets punched in the face.

I get that people love their kids. I do too (mine, not theirs). But we do no one any favors when that love manifests itself into over-the-top materialistic displays that leave some kids with less wondering why Santa is such a withholding dick.

Let’s lower that bar, parents. Your wallet and sanity will thank you.

Here I was. All excited for my four-day Thanksgiving holiday, and come to find out that Thanksgiving is NOT a sexy holiday.

It’s true because I read it in Glamour magazine. Not only do I have 60 fun nail polish ideas to try this week (Must remember to stock up on nail polish remover), but I will have to do my sexy at some other holiday because scientifically,  Thanksgiving is a cold turkey.

Why so unsexy, Thanksgiving?

Because someone had a deadline to fill and someone else said “Just write something about Thanksgiving and put sex in it. Can’t you see I’m doing my nails? Fuck, I have 54 other combinations to try out. Get out of my office!”

Was I suppose to really read the article?

So there are 28 reasons, and I read them all. And in between my reading, I changed my nail polish 4 times.

It basically comes down to this:

Your genitals stay covered up because your Aunt Sylvia would be like “Um….why am I seeing your pubic hair” and turkey skin is all goosebumpily.

It’s not like Easter with the eggs and sperm and bunnies copulating like…well bunnies. Or Flag Day with those flags on those poles, waving their patriotism in people’s faces.

So, sorry America. You will have to celebrate your Thanksgiving in a sexless fashion, which I think kinda works since it commemorates the pilgrims and stuff and they were way uptight.

Don’t fret because Dec. 8 is Take It In the Ear Day. And that sounds sexy as shit.

Dearest Reader: Speaker7 is attempting to write a post every day in November so she doesn’t have to participate in NaNoWriMo (National Novel Writing Month). This is getting in her way of her Take It In the Ear Day celebration, but she soldiers on because she loves you.

Now that I have a two-year-old, I have been hounded with questions about whether I’m taking my son to an Easter egg hunt.

(Full disclosure: No one has asked me this)

The short answer is no.

I might have mentioned I once worked as a newspaper reporter. Thank you. Oh, wait you weren’t applauding. I thought maybe you were applauding.

I was a serious journalist, and that is why I covered the annual Easter egg hunt at the local park. I asked some tough questions like “Why are you here?” “Do you think you’ll find an egg?” and “Is there a bridge nearby? I’d like to jump off it.”

It begins all nice and egg-free. The kids appear human as do the parents.

But as soon as the air horn sounds, it quickly devolves into something resembling a Black Friday stampede for the cheapest electric egg cooker.

"Screw the conch, I want me some eggs!"

Parents, who have already staked a position by an easily visible egg, pounce upon it like a pack of jackals, spraying their urine and feces freely to ward off intruders.

Okay, maybe not that, but they yell really loud and basically push two-year-olds out of the way. Once their grubby snot-nosed child picks it up (always snot-nosed, always dripping, always the child I end up having to interview at the end of the 3-second bloodbath, always manages to get snot on me), they move onto the next egg, bawking orders like chickens if chickens could bawk orders, and just generally making the Easter Bunny weep hot tears.

Even after reading this, you feel you must subject your offspring to an early taste of dashed hopes and despondency, please follow these tips: