But let’s say it: I’m in a bit of a slump. Does that make you feel better, you widowed orphans with your gruel and your tears and your “please, sir, I want some more”? I bet it does. I bet it feels just as good as a second helping of slop slopped into a dented bowl.

So I opened a bottle of wine and poured it down my gullet, hoping the fermented grapes would help me on my turd vision quest.

There is a veritable turd cornucopia happening in D.C. at this moment. The Conservative Political Action Conference, CPAC, is underway. Ann Coulter has stated that only pretty girls are right-wing. The name Ronald Reagan has been mentioned 5,124,902,321 times. And I have heard too much…hence the drunkative drunkical drunkation drunference of 2012 sponsored by Beringer.

I really should have stuck with sussing out the “emotional” interview a “real” “housewife” had with a “real” “doctor.” I am meaning the collagen-lipped Taylor Armstrong and the celebrity-rehabbed Dr. Drew. But I gave up after one fruitless Google search and a half-hour wasted on Facebook reading people’s Pinterests.

And while they are both turds, they did not meet the stringent requirements of Turd of the Week™.

Rep. Sen. Mitch McConnell spoke at CPAC. This is him: 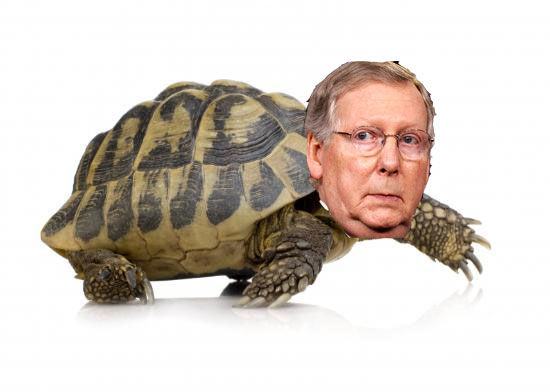 He said many things I didn’t understand, but then again I do not speak turtle. He ended his speech with the rallying cry: “Don’t pick on Fox News!!”

And I down my second bottle and weep.

President Obama wants to declare war on the Catholic Church, Newt insists. I am thinking this has something to do with the new health care rule that requires insurance coverage for birth control. As someone who has frequent affairs, Newt should be a fan of birth control. But he’s more a fan of pandering to a crowd of people who likely also use birth control otherwise the Duggan family wouldn’t have a reality show, right?

So he’s a giant-headed giant turd.