This was not a well-thought out plan. Curse you, NaNoWriMo.

In case you didn’t know, I began a new feature called Ask Hunky Hugo™ where readers could submit questions to the world’s creepiest half-man puppet. I completely stole this idea from the Byronic Man. So basically all this weirdness is his fault.

Some of you had questions that were of a sexual nature. These made Hugo very excited, which in turn made me feel a discomfort that rivaled the time a giant golden retriever burst in on me in the bathroom.

Storkhunter wanted to know: Since you portrayed Christian and managed to get Goofy Ana pregnant even with only half a body, perhaps you have some advice on sexual positions for effective procreation.

Nancy of Not Quite Old wondered: Do you think older women are sexier than younger women? What is the sexiest thing about women over 60?

Tara of Always Overthinking It pondered: Do you prefer to go down on women with or without your mustache? Do you find they enjoy it more or less?

Maggie O’C of Someone Fat Happened: I have been waiting for this moment for months now. I won’t read any posts if you aren’t in them. Any, not just Speaker7′s. Two questions:
1. How do you feel about product placement in blogs?
2. Will you get me pregnant even if I’m menopausal and you have no genitals?

Jo Eberhardt queried: Back when you were just an anonymous half-man puppet amongst starting out on the rollercoaster ride of fame and infamy that was Speaker7′s 50 Shades Recraps, I thought you were creepy looking. But now when I look at your smooth head and your expressive eyes, I find myself moved by your extreme hotness. How did you get so sexy? Have you had plastic surgery?

Hugo had the same response to all. He said you would understand what it meant:

Some of you had questions about Hugo’s lack of a down there–sorry I have lost all other terminology to describe it from my Fifty Shades of Grey recrapping. And some of you worried about Hugo’s mental health from his participation in the Fifty Shades recraps as the enigmatic and buttpluggy Christian Grey.

Miranda Gargasz of Scattering Moments worried: What sort of medication do you take for the PTSD you suffer through after participating in all those recraps? Seriously, I need to know. After only making it through chapter 7 of the first book I find the flashbacks unbearable. Any help you can give me, Hugo, would help.

Michelle Gillies of Silk Purse Productions asked: Were you at all uncomfortable gaining fame and fortune from portraying the 50 Shades of Grey recrap moments? What made you the most uncomfortable?

Lyssa of Psychobabble expressed concern about Hugo’s genitals: Where did you leave your legs? And your genitals? Did they shrivel up after all that recrapping with Ana?

iRuniBreathe questioned: Hugo, where are your pants? And legs, for that matter.

Hugo had the same response to all. He said you would understand what it meant.

The rest were a smorgasbord of bizarre that really had no common grouping. Hugo decided to answer these individually.

Jules from Go Jules Go: Hunky Hugo, do you like it when girls cry? If so, then what are you feelings on Fergie from Black-Eyed Peas, who claims, rather passionately, that big girls don’t cry

Heather from Becoming Cliche asked: Hugo, I can’t balance a checkbook. Should I see a chiropractor?

El Guapo asked: Hugo: Are you just a pawn in Speaker 7s play for world domination, or are you just biding your time, lulling her into a false sense of security until you can run off with all her reindeer sweaters? 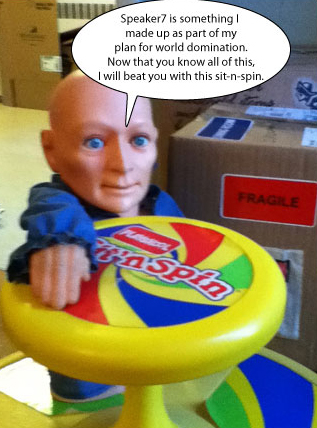 Jen from Sips of Jen & Tonic: Cockfighting: sexy man play or cruel animal sport?
Would rather: Charlie Sheen in his Tiger Blood phase or Nick Nolte during his mugshot phase? I found out I have herpes while browsing WebMD. Is that a deal breaker for you? 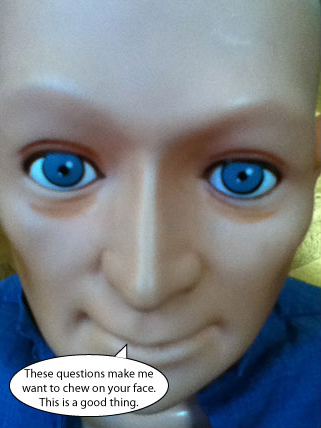 She’s a Maineiac posed this: How can we stop Dr. Phil? Who would you rather have sex with, Stalin or Dr. Phil? How much wine is appropriate to drink on Thanksgiving? Is it okay if I get sloshed, then ask my mom why she never loved me while I’m passing her the peas?

Alice of Alice at Wonderland and Ruminations on Love & Lunchmeat both wondered what Hugo was doing with the locks of hair he collects from his admirers.

The final question was by far Hugo’s favorite. After he read it, he made out with his reflection for over an hour. I present Madame Weeble’s tour de force:

Madame Weebles of Fear No Weebles: Do you prefer to garotte your victims using leverage, or brute strength?

Dearest Reader: Speaker7 is attempting to write a post every day in November so she doesn’t have to participate in NaNoWriMo (National Novel Writing Month). This is the 4,000th post or at least it feels that way.

I completely stole this from the Byronic Man, but I’ve been blogging for 20 straight days, I’m suppose to pack up and move out my house 20 days from now, and this sentence will peter out without a third 20 thing.

Byronic Man does this awesome Ask Sexy Stalin feature that makes you laugh and feel uncomfortable at the same time when you realize you’re seeking advice from a mass murderer who is quite hot frankly. Byronic Man featured one of my questions the last post and I am set to win an amazing What Would Sexy Stalin Do bracelet.

I probably should have waited until I received it before I stole his idea. Well reindeer sweater, I guess I’ll have to find another bracelet that will perfectly accessorize with you.

Anyway, I have my own homicidal maniac who also happens to give killer advice with the emphasis on killer.

You can ask Hugo anything, and I mean ANYTHING. The weirder the better. As Hugo likes to say, the more he knows about you, the easier for him to control you.

So let’s meet Hugo, shall we?

Hugo, what are you doing?!? 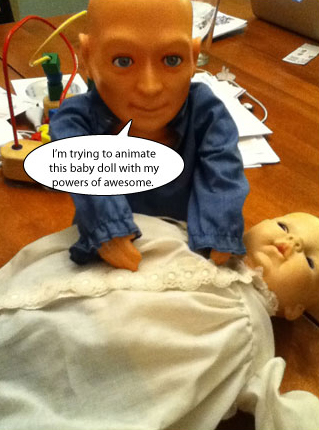 Well, it looks weird. Can you please stop? I’m trying to pass you off as an expert in the same manner Oprah convinced the world that Dr. Phil should be allowed to speak.

Very true. Hey…why are you doing that? 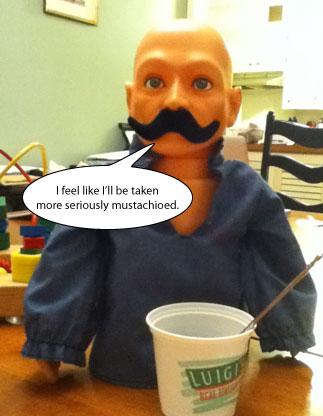 Well, you look like a Mario brother. Do you have anything you want to say to your advice-seekers? 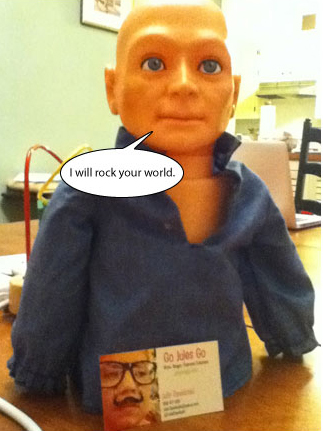 All right then, if you feel a creepy half-man puppet can help, please leave your questions in the comments. I take no responsibility if Hugo shows up at your house.

Dearest Reader: Speaker7 is attempting to write a post every day in November so she doesn’t have to participate in NaNoWriMo (National Novel Writing Month). Why is November so long? Why? Hugo loves you.