How many submissives does it take to insert a butt plug?

As many as the dominant says it takes.

Bada-bing. I’ll be here all week!

Before this goes any further, I would like you all to address me as “Sir” in the comments. Or “Lord Voldemort” or “Rubberface Gimp Monkey” or “Chunkstyle”…you know what? Just forget it, I’m too wishy washy to make it as a dominant.

Don’t look me in the eyes.

In this installment of 50 Shades of Tears I’ve Shed, Christian and Ana revisit the red room of pain. To read how we got to this point, click on these recraps or do something pleasurable instead:

Before Christian can chain, truss, knot and braid Ana’s pubic hair, he first lets her visit a lady doctor to examine her nether regions and put her on the pill so he does not have to order elephantiasis-sized condoms from Oriental Trading anymore. The doctor tells Christian to look after Ana as one would a sweet, brain damaged dog. That is, like, so sweet.

Ana’s inner goddess has picked up a couple of pom poms and borrowed a cheerleading outfit from the set of Glee.

Christian peels off Ana’s clothes leaving her clad only in panties, and makes her kneel–eyes downcast of course–in the corner. No one puts baby in a corner says the ghost of Patrick Swayze.

Christian changes into acid-wash jeans (Holy fuck hot! Ana predictably thinks). He peels off her panties and sniffs them vigorously. I wish I was making this up, but alas, I am not:

He chains her up to a William Sonoma® pot rack and smacks her “down there” with a riding crop. Of course, this causes explosions to rocket through her body:

Throughout this panty-sniffing, Ana desperately wants to lick Christian’s chest. Hot, right? Sure.

Christian is not finished with Ana. He knocks her down like a piñata from the pot rack and secures her wrists with a cable tie. He takes her to bed and has her grasp onto the bed post. He tells her she has a “sexy ass.”

Christian takes Ana, panties-less, to meet his family for dinner. The Grey house is all wood floors and antique rugs with sweeping staircases. That sounds…weird. There’s no furniture? They mutter and murmur at each other. Christian’s sister Mia is a bit different in that she chooses to shriek her remarks. She is not a pomeranian puppy to clear up any confusion, but a full-grown adult woman.

Apparently there is a dining room table. They all sit around it and eat corn dogs–except Christian:

Christian becomes enraged when Ana tells his dad she might go see her mother in Georgia. He clamps his hand like a genital clamp on Ana’s thighs. “C’mon I wanna show you my spanking hand…er…rowing trophies,” Christian glowers and seethes. He takes Ana to the boathouse to have his way with her:

I can’t tell you how much this reminds me of the time I first met my husband’s family…well except for the rowing trophies part.

It can’t all be humping and genital wax (is that a thing?). Sometimes you’ve got to take a step back and do a little expository writing to move the “story” along.

This, gentle reader, is what happens in pages 151-200 of Fifty Shades of Glop. Christian does tie Ana up and cause her to explode and break into pieces simply by blinking his eyes (like all men can), but for the most part, in this section we get some insight into the nature of their soon-to-be “relationship”.  We get a full-length legal contract (HOT!!!) and an IT house call (HOTTER!!) and emails (HOT CRAP!). For previous installments, click here, here and here.

Today a stray cat got into my car when I left the driver’s side door open and headed back into the house. I first thought it was a squirrel, but then realized it was a cat. Normally this would provoke a reaction. Maybe a startled gasp or a “What the fuckity fuck fuck!!!!” but I felt nothing. This is what this book is doing to me. I am losing the ability to feel.

Christian has a mommy. She shows up post-orgasm. Christian has “just-fucked hair” observes Ana. They murmur at each other. Ana pees on the floor (maybe).

Christian drives her home. E.L. James spends some time pointing out that he has Mariner baseball caps in the glove compartment. Great. Now I know everything.

They stop to eat because Christian has a little issue with food (BOOM! says foreshadowing hammer). He orders wine. Ana pouts because she wanted Diet Coke. “Stop biting your lip,” he orders. “Poop on you,” she sasses back. Or something. In between murmuring and hooding their eyes (whatever that is), Christian discloses that a friend of his mother’s made him her sex slave when he was 15. Then they get appetizers.

Christian drops Ana off and she begins to feel despondent about being apart from a man who can simultaneously curl and arch both eyebrows. It also appears that Ana hears multiple voices because now there is an inner goddess who bickers with Ana’s subconscious:

There are appendixes! Holy toaster strudel! moans my inner goddess. 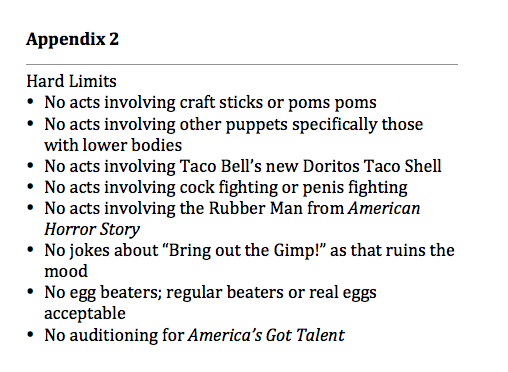 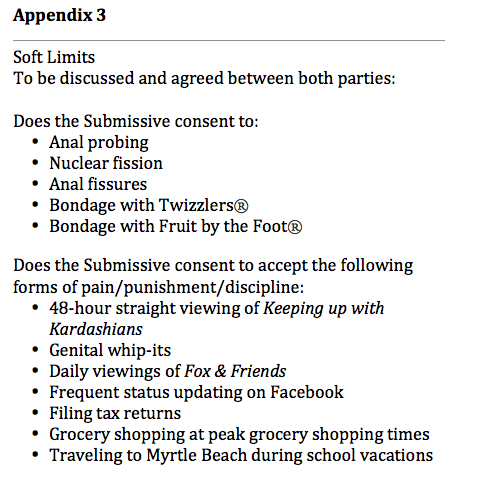 The deal breaker for Ana is Appendix 4 which lists the acceptable foods to eat. The giving-up-complete-control-of-mind-and-body is no biggie, however. She is fantastic! Craptastic even! Feminism for all!

Christian buys Ana a laptop because she lives in 1994, and is the only person under 25 who doesn’t know how to use a computer. The computer comes with an IT guy to set it up, and he’s a dickhead so for the first time something rings true in the book (sorry any readers employed in the IT field. You are wonderful and I love you).

She sees she instantly has an email from Christian. We luckily get to see their correspondence in full: 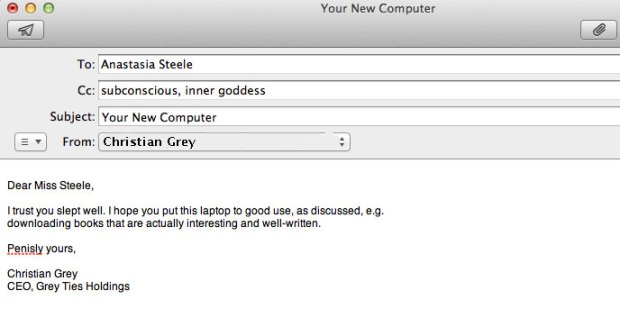 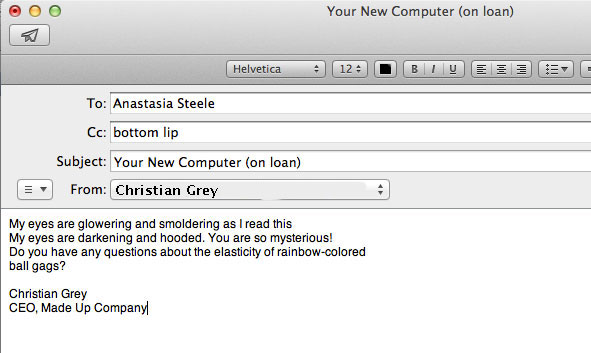 A little while later, Ana sends a joke email giving Christian the kiss off. This makes lots of sense because Christian is not the slightest bit humorless or devoid of any emotion.

He shows up at her apartment, and they have a rational conversation about expectations and guidelines about their pending relationship. I’m joking. They f*** hard because…um, why else would anyone be reading this?

Oh yeah. Things are getting really holy cow now, dear reader. It’s, like, almost as hot as that bachelorette party I attended where a guy showed up in a Domino’s Pizza uniform and shook his pepperoni stick, if you catch my meaning.

You don’t? Well in the next 50 pages, Christian and Ana get it on like a couple of glowering, muttering, feeble-minded, two-dimensional paper towel holders, and those things can f*** hard. If you wish to know how these characters got to this point, you can read my previous recaps here and here. These will be of no help.

Before Christian’s cartoonishly large penis can penetrate Ana’s down there (E.L. James’ vivid word choice, not mine), he shows her his red room of pain:

E.L. James describes this room as a big uterus that smells of Pledge® (slight paraphrasing). I hope my picture does her description justice. 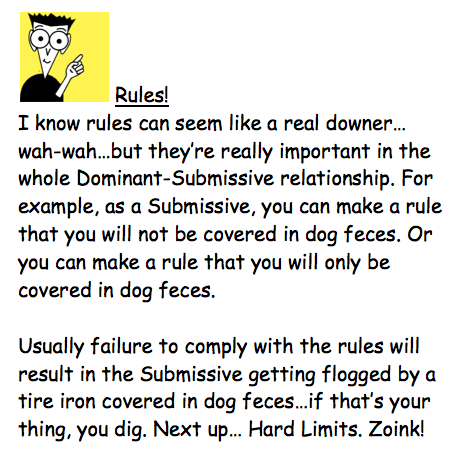 “Is there anything you’d like to add?” Christian asks, taking a sack of frozen dog poop out of the refrigerator to defrost.

Holy dog crap! Ana thinks and chomps on her lower lip causing blood to spurt all over the walls. “I haven’t gotten jiggly wiggly with anyone.” Christian smashes a crystal goblet against the fireplace. “Why the fuck didn’t you tell me,” he growls (actual line from the book).

Christian decides to rectify the situation by making love to her lower lip and other parts of her body, specifically the down there part where the thing goes in and then goes out and then goes in again. Is it getting hot in here? I’m going to go open a window. Jesus Christ! It’s 95 degrees outside.

So yes, they do it and she gets tied up in her bra a bit–and fine–and he nibbles and fingers and jerks and leans and moans and growls and she responds with pirate noises. Seriously, she says “Arrgghh” a lot. Not as much as “crap” though:

He “pour(s) himself into” Ana a couple of times and then it’s beddie-bye bye. Ana wakes in the night to the sound of Elmo playing his out-of-tune piano. This is to signify that Christian is “sad”. 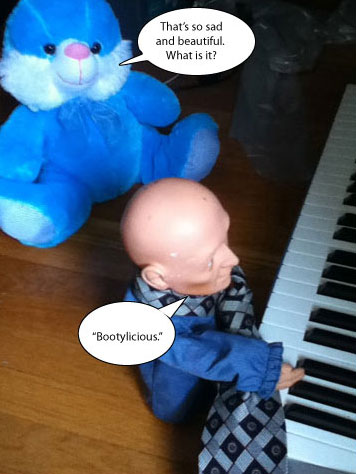 Next morning, Ana makes breakfast. Christian insists she eat the skillet and spatula along with the pancakes. Then with nowhere else to go, the author decides it’s sexy bath time. Ana impresses Christian by being able to insert his entire body in her mouth.

They continue the romp-in-the-hay in the bedroom. This time Christian ties Ana’s hands together with his grey tie.

Holy crap, you guys!! Did you realize his name is Grey and his tie is grey and this book is called 50 Shades of Grey. What do you think it all means?!?

I guess I’ll find out when I slog through another 50 pages. I need to rework  my Hard Limits for next time. This daily flogging is really taking a lot out of me.