Donald Trump is the news again because. . . um . . . there have been no shark attacks? I’m not sure why.

ABC scored the interview after a bull shark from Discovery Channel’s Shark Week had to cancel.

Trump is our generation’s P.T. Barnum, if P.T. Barnum was a raging hemorrhoid covered in silly string.

Here’s what happened: A moistened hole opened in that giant orange face and spewed out something. What he said was a mystery because I had the interview on mute. I just got over a debilitating case of diarrhea; I didn’t need a relapse.

I can only imagine the important news Trump imparted: 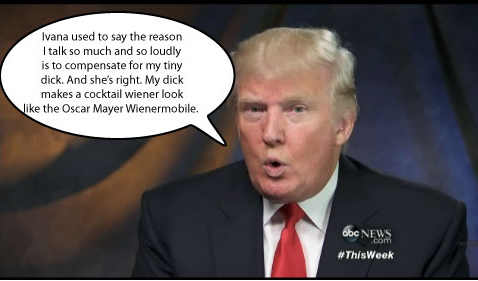 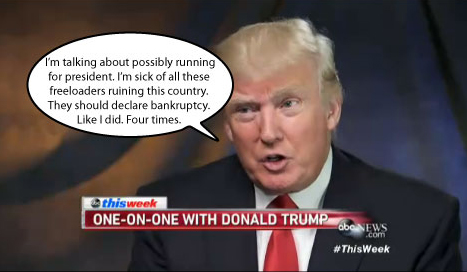 And perhaps the biggest surprise of all: 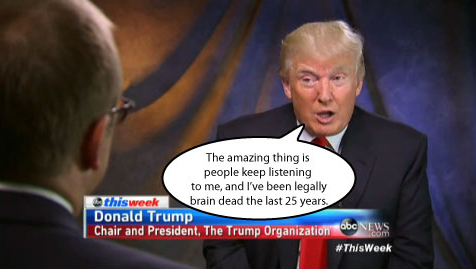 People hate being embarrassed. I remember reading an article about choking in restaurants. It stated one of the main reasons people died is because they left the table to deal with the choking in the privacy of the restroom so as not to embarrass themselves in front of others with all the gasping and eye-bulging. It embarrasses me that I cannot remember the name of the article or find a link to it.

In 10th grade, I was walking and waving to a group of friends on the front lawn of school. My head was not turned in the direction I was going, and I fell over a bicycle rack. To make it even better, the boy I had crush on witnessed the entire event. I immediately left school and joined a nunnery in the Himalayans. Here’s the kicker: There wasn’t a nunnery there. I was so mortified that I tried to pass myself off as a curvy monk, but my bright red cheeks and excessive sweating gave me away. And I’m not even curvy. Why did I say that? Oh my god. I’m completely humiliated.

Some sciency people say embarrassment is a good thing (is sciency people the right word? What are they called? Sciencers? Sciencence? This is mortifying). It’s a sign of virtue. It shows you can be trusted, and it makes motorists stop when they mistake your bright red face for a stop sign.

So what does it mean if you’re someone who is not easily embarrassed? Does it mean you’re an untrustworthy asshat? The sciency folks could not say for sure, but maybe would look into it in the future.

Well let’s look into it now, shall we. Let’s examine the behavior of one Donald Trump.

Donald Trump cannot be embarrassed. Just look at him: 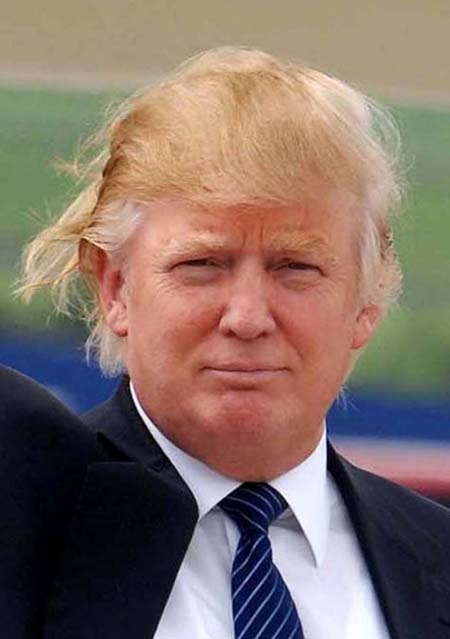 He knows his hair looks like cotton candy run through a taffy pulling machine then set on fire and extinguished by a pound of cat fur mixed with sawdust.

He recently blathered some nonsense about Trump steaks. No wait. It was about his many bankruptcies. Nope. I’m wrong again. I’m totally blushing right now.

See, I would be embarrassed to say something that’s been so obviously refuted that it’s on par with saying something like “Donald Trump is virtuous.”

Donald Trump said this right before hosting a fundraiser for Republican presidential nominee Mitt Romney. Mitt Romney said he believed Obama was a natural born citizen, which was very big of him. Using the word “believe” means there could be a tad uncertainty about it. Well done.

I believe Mitt Romney escaped from the Chuck E. Cheese automaton band, and is full of ricotta cheese. But that’s just what I believe, man. You can believe your own ride.

I also believe that Donald Trump is actually a robotic megaphone coated in spray tan and axe body spray.

It would explain the inability to be embarrassed.

But what I do know for certain is that he is an untrustworthy asshat.