This was not my favorite episode, which is saying a lot because I hate all episodes of Bachelor Pad. And my two-year-old is ill with crying-itis so frankly, gentle reader, we’re going to get this over speedily like a quick shampoo to clear up crabs.

The contestants leave the house and arrive at the abandoned set of Nickelodeon’s Double Dare game show. Host Chris Harrison tells them they will participate in a relay called Hot Sludge Funday, which basically means they will scoot around in goop. The female half of the pair goes first and finishes by dousing herself with nuts. The male half finishes by eating a cherry. And Bachelor Pad producers get a C-minus for sexual innuendo. The twist is partners will be paired up randomly.

Ed, the drunk contestant who was thinking of leaving because he almost was voted off, is drunk. He gets stuck on the wall of shit, which could be seen as a metaphor for his life. 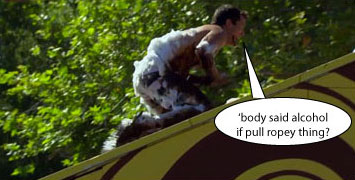 Ed and his partner Jamie lose and each have an elimination vote cast against them. Super fan Dave and his partner Rachel win the competition, an immunity rose and a date with three other people.

Dave’s date is first, and he chooses to take Jamie, Blakely and Erica. I’ll let Jamie set the scene: “We arrive at some red-carpeted place.”

Jamie never went to her senior prom because senior year was when her mom kind of checked out on the whole parenting thing. Dave wants to give her his immunity rose, but Blakely is all like “Oh hell no.” See Jamie and Blakely do not get along because Jamie made out with Blakely’s partner Chris and oh my god, what the fuck am I writing?

Blakely brings up Dave’s promise to vote how she wished, and makes the sweeping pronouncement that Dave’s time on Bachelor Pad is short-lived. Isn’t everyone’s? What is this show on for another two weeks? I’m sorry what I meant to say was “Oh my god.”

Rachel’s date is next. She takes Nick(?), Tony (?) and Michael. I swear I thought Nick/Tony was the same person, but apparently not. They arrive at Madame Tussauds wax museum. “I’m just a normal guy and all of a sudden, I’m surrounded by celebrities,” says Nick/Tony. Does he not understand that they are made of wax?

The kicker is the four contestants will be done up like wax figures to trick Bachelor fans. Is the trick that they’re not actually celebrities?

The fans are brought in and asked questions about the wax-like Bachelor contestants behind them. One woman is unsure who Tony even is (that makes two of us) and then remembers he was the pathetic one.

Rachel gives Michael the immunity rose, and the two feel all kissy-face in Butch Cassidy’s hide out.

Meanwhile at the pad, Jamie goes on and on about Chris’s love for her, and his desire to dump Blakely as his partner to hook up with Jamie. “To fall in love on this show would be amazing,” she delusions.

She goes to Chris’s bunk and he gives her the whole it’s-not-you-it’s-me-but-actually-it’s-really-you speech.

Jamie cries and says she’s awkward at dating and it’s really hard for her to trust people. Here’s some advice: meet someone not on a reality game show.

Elimination day. Reid floats around in a pool and unveils his plan to destroy Ed. He looks very intimidating in his polka-dotted inner tube.

Sarah feels she owes it to Ed to tell him what’s coming down the pike. Ed feels the inner tube of betrayal constrict his waist.

In a talking head, Ed vows to retaliate. 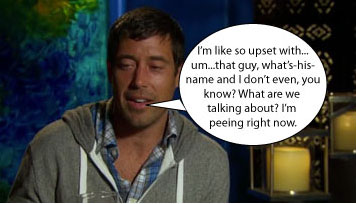 Later that night, he confronts Reid in the pool. Reid feels powerless without his polka-dotted tube holding him up, and is a terrible liar. He starts to sweat immediately and shifts his eyes all around. Ed tells Reid he sucks and knows that Reid is conspiring against him. Reid is all “Ruh-roh.”

Blakely worries she is also going home and turns to the men for assurance. Tony does what he can: 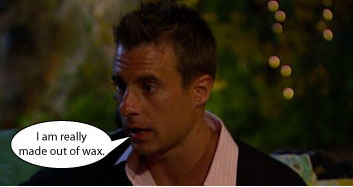 But in the end it is Reid and super fan Donna who are sent packing. Before Reid leaves, Ed’s partner Jacelyn says “I’m shit-faced. . . oh and Reid you’re a dishonest whatchamacallit. I’m drunk, yo.”

In the limo, Reid has a moment of clarity when he says: “I feel like a pretty big loser right now.”

Texas Gov. Rick Perry is known for saying controversial things like printing money is almost treasonous and the BP oil spill was an act of God. But he might be onto something with the whole Texas secession thing. At a tea party rally, Perry suggested that was a possibility because he w believed the federal government was out of control with something or other…I can only listen to politicians for so long, people. I’m not a super human. But I know a better reason:  Most Eligible: Dallas

This is a new “reality” show on Bravo. It “stars” “people” who all think they are Carrie Bradshaw in Sex and the City.  I watched episode 3 yesterday. I first consulted a dictionary to see if the definitions of “most” and “eligible” had changed. No, they still mean the same things…hmmm….confusing.

Shots of cityscape. A horse scratches its leg.

This is the most interesting moment in the show

Two people talk on the phone. We only get to see one of them. She is Carrie/Courtney and she is in bed and watches herself in the mirror while she talks to Neill. Her name is spelled out in giant letters above the mirror. This is more out of necessity then vanity when one considers the amount of alcohol she is shown consuming in an episode. Carrie/Courtney has called this summit because she slurred some things at Neill the previous evening. She hangs up the phone with a “And that’s how it’s done” and flings open her closet with an “It’s on bitches.” I’m glad she understands what’s going on.

I miss that horse.

Moving on to Matt. He is eating with an underling. Suddenly Holly shows up, conveniently wearing a wireless mic pack and all a pandemonium breaks loose. Here is their conversation:

“Lots of good things going on, but sometimes a bit overwhelming, you know. Don’t you feel like that? You’ve got a lot going on too,” Matt pries.

“I do except I’m going on vacation. I’ve so much to do,” Holly breathlessly confesses. A waiter sets down a parfait. “That looks good.”

“I know, I know, but that’s because I don’t have anything holding me down now,” Matt quips. “I’d like there to be more. What are you looking for? What’s on your agenda coming up?”

“I’m just taking it easy day by day,” Holly drones. “I’m not real thinking too much into the future right now.”

“That is so refreshing to hear that,” Matt platitudes. “I feel like I never hear that from anybody anymore.”

That is some good TV right there. I’m not sure, but I think I might have had a more compelling conversation with my 17-month-old son yesterday while watching traffic. You be the judge.

“Ooohhhh! Did you see that? That car had a doggie”

“So what are you looking for, what’s on your agenda coming up?”

Matt says he’s not ready for commitment. The human race says “thank you.”

Carrie/Courtney and Neill summit is on bitches! Neill has a child. They wear matching fedoras. Carrie/Courtney shows up wearing a giant red tablecloth. She needs herself some wine…as do I at this point. Where is that horse? I need me some horse.

Here is that horse from a different angle. Let’s look at the horse while Carrie/Courtney speaks. It’s so much better. 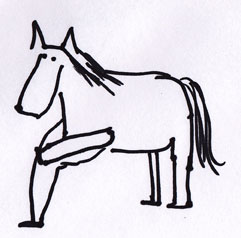 Don't pay attention to the drunk tablecloth. Just look at me.

We move ahead to Carrie/Courtney, Matt and Glenn at brunch. Carrie/Courtney brings up some cancer charity event. Cancer patients say “That’s okay. We’re doing fine. We really don’t need any help…from you….ever.” C/C has signed up Matt and Glenn to be auctioned off. They will wear shirts that say “Ask me about my package” because it’s a date package. Those are some lucky women. Someone says “This is going to be interesting” and that someone is not me.

C/C is with a blow-up doll at a nail salon. Oh, the blow-up doll is a human named Tara. That’s a neat twist. Tara Doll is dating Jody who shows up for no discernible reason. Oh dear Christ, he has a white soul patch. I’m done…

Other things that happen….Glenn rips off his shirt at the date auction. Carrie/Courtney drinks. Tara Doll claims she’s picky and goes out on a date with a turd. Carrie/Courtney would love to be a mom(!?!). Matt goes on a date with MJ, calls the waiter “buddy” and asks for the restaurant’s most eligible drinks. The waiter sets down a glass filled with a hunk of pink insulation and pours Windex over it. Unfortunately they survive.

The horse is not shown again.