Sometimes one just has to write even when one has nothing to write about and no inspiration.

This is what this is.

It has even affected my art.

This post will have the feel of a random letter you read in the local newspaper where the writer has clearly lost his mind, but must commit his madness to paper if only to be able to continue on. Kind of like this: 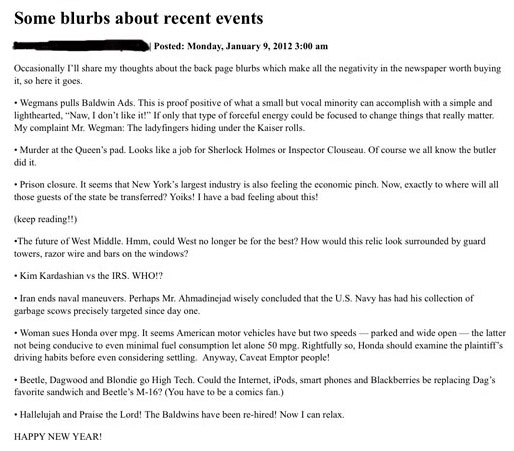 So I thought I should do the same thing. Clear out the clutter and cobwebs, stop being like Gollum and thinking of my blog as precious, and just write a list of pure dreck and end it with an exclamation of well wishes.

So here goes a list of worthless gibberish for your non-reading non pleasure to unblock my writer’s block:

It was tough this weekend, wasn’t it?

Wishing and hoping and thinking and praying. . .

Planning and dreaming each night of his charms. . .

I’m speaking obviously of Matt Lauer and the return of Who Gives a Giant F*** Where Matt Lauer is. . .Seriously, Man. It’s a f****** Recession. I Can’t Pay My Mortgage and You Expect Me To Play Along with Some Dumb Game That Just Shows the Obscene Amount of Money Television Has to Waste? on the Today Show.

On Friday, Matt left viewers with a cryptic clue to figure out where he would turn up on Monday. I spent all weekend mulling it over, which proved difficult because I had not actually seen that segment. I assumed the riddle was this: Why is a raven like a writing desk?

All week we’ll get to follow clues and try to guess what place Matt Lauer deems worthy enough to bark orders at production assistants to bring him steamy hot caffé macchiatos.

Oh I’m sorry… my husband just informed me that the actual title is Where in the World is Matt Lauer. There’s even a jingle!

Who in the world
would watch a tool
like Matt Lauer

It’s an anniversary
one I wish I didn’t see.

Apparently three other people–Ann Curry, Al Roker and Natalie Something–care where Matt Lauer is. They, like me, questioned all weekend. They also get paid millions. That is not like me.

So where the f*** is he? The clue was this: Conjures up thoughts of a child’s worst fright, but there’s no people to scare in this skier’s delight.

No, he’s in Namibia. All kids are afraid of skeletons, explains Matt. They are?

And you can ski on sand dunes in the desert on the skeleton coast of Namibia hence the no people and skier’s delight.

Okay, that clue was lame even by Today show standards.

And he’ll be somewhere else tomorrow.