With the government shut down heading into its second month, many federal workers are facing hardship, but none so much as Commerce Secretary Wilbur Ross.

Ross, who looks like a less handsome Admiral Ackbar, is struggling, you guys. He’s having to take breaks from looking into ways to suppress the latino vote to think about why unpaid government workers need to use food pantries.

“Can’t the cook just make a white truffle and gold pizza from the basic pantry items?” Ross wondered as he opened bottle after bottle of $225,000 Chateau Margaux only to pour them out over a cleaning lady who is incidentally an unpaid federal worker.

“My doomsday bunker in New Zealand has a year’s supply of high-end ice cream made from the breast milk of albino sherpas. I’m at a loss as to why they don’t access the foodstuffs from their doomsday bunkers in New Zealand?” he asked as he painted his own visage into Renoir’s Le Moulin de la Galette.

“Can they not just steal millions from their business partners and hide it with bogus paperwork and exchange those stolen millions for food products? It boggles my brain that those people who do those things….what are they called now? When you go into an office and someone hands you a sack of money with a dollar sign on it? Grifting?” 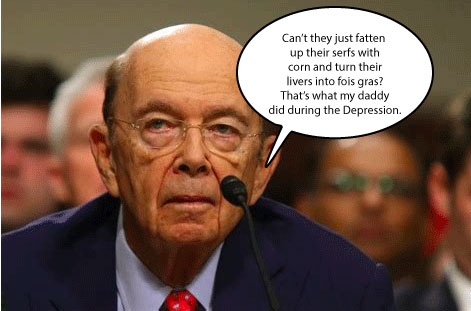 Ross suggested the helpful notion of taking out a loan to pay bills. “Sure there’s a bit of interest, but then you just steal from your business associates and problem solved,” he said before diving into a bathtub full of $1,000,000 bills.

Lara Trump, whose father-in-law received at least $413 million in today’s dollars from his own dad so he could piss it away on shitty business deals, also weighed in on the government shut down.

“Listen, it’s not fair. I know that. I married the least intelligent Trump and that is saying something,” Lara Trump said. “But this sacrifice, this inability to pay your bills and take care of your family will be so worth it because I’m on tv right now. It’s a win-win.”

It may seem a bit tone-deaf for multimillionaires whose bosses/father-in-laws started this whole mess and could end it in a heartbeat, to be commenting on the struggle of actual people. But that’s because these people are giant assholes.

Don’t just take my word for it. 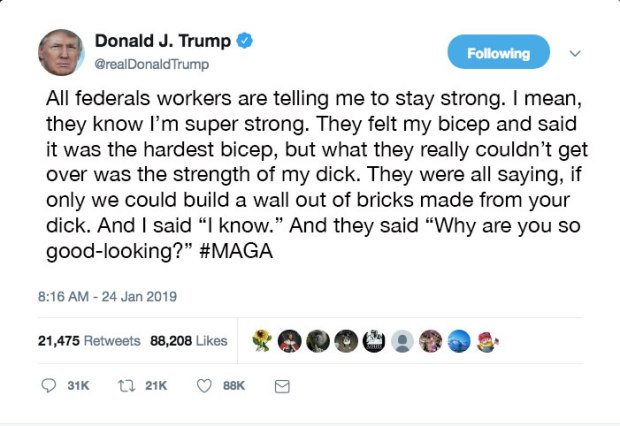 Listen up. I’ve got a few more years to be lovable and I’m not going to waste them. I didn’t realize that when a woman hit 50, she ceased to elicit any feelings of any kind except the feeling of ewwww.

But apparently it’s a thing and it’s total science, like it’s up there with the time President Donald Trump said California only needed to rake its forests to prevent fires. That’s why his announcement today to cut all FEMA funding to California for wildfire management makes science sense.

But enough about that brilliant man, let’s get to this brilliant man. Of course this assessment comes from a man (obvs since men do science and women do nails) who knows stuff because he’s like 50 and all wizened with the wisdom that comes for 50 years of being encouraged to open his man hole and spout his man knowledge.

French author Yann Moix told Marie-Claire, the French version, that he can’t even see women 50 and over. That’s likely because eyesight is one of the first things to go as one ages. And he’s 50.

Younger bodies were more interesting, he mused as his increasingly aging balls sagged even lower.

“I like them. They way they have tits and ass, and I think that is all. There is a face? Maybe?” he said, getting up from the couch his knees snapping and creaking from the effort. He grunted a painful “Oof” and rubbed his knees. Jesus Christ, his knees ached. He wondered if it was gout from all the foie gras he consumed.

“I like bodies, preferably Asian bodies,” he stated as he realized he peed a little in his pants. His prostate pressed against his bladder; these “accidents” seemed to keep happening more often.

He said he was the prisoner of his tastes, one that preferred women to come to him in a box with different parts that he could assemble like a younger body Asian potato head.

“I don’t have to answer to any taste police,” he harpied as the bile rose in the back of his throat. Heartburn becomes more prevalent as one ages.

And Yann Mois has a non-young, non-Asian body that is 50 and possibly invisible.

“Maybe older women could provide some use, no? If they could go to some factory and be grounded up into dust that could be used to make younger Asian bodies?” He stopped for a minute and shuddered. “Still disgusting. And unlovable.”

Mois left the Marie Claire offices and stumbled onto the sidewalk. Unable to see the crush of 50-year-old bodies, but yet could feel something non-younger pressing against him. He panicked and ran into the street, and was promptly run over by an Uber driven by a non-Asian 57-year-old woman.

“I couldn’t see him,” she told police.

I am in a state of shock so it is a bit difficult to write. Something happened that shook the heavens, unspooled the thread of human progress and destroyed a child named Caden’s sense of wonder.

Okay, so that’s not exactly what she said, but any time I’ve tried to write what she actually said, I go into a Bird Box-like trance and reach for the scissors to plunge into my neck. I look at my child and cry for his lost innocence.

This woman, who’s name I have trouble pronouncing and appears to be a terrorist, was using such vulgarities in speaking about President Donald Trump, declaring she wished to impeach him. Trump rightfully stated that he thought her comments were disgraceful and that she dishonored herself and her family.

It’s as if she has no idea how to act diplomatically. She wouldn’t know the first thing about mimicking a disabled reporter, mocking a sexual assault survivor and eagerly embracing a parade of murderous dictators.

America is known for its strong sense of civility, its adherence to respect and decency, and its keen awareness of what designates a country as shithole or not. We hold these truths to be self evident: some women are pigs and others bleed from their wherevers.

And now this? This is what we are? A nation that must contend with a freshman lawmaker using vulgarity? We, of course, must analyze this indefinitely unless Sen. Elizabeth Warren does something else to increase her unlikeability. These are the only two issues affecting this tremendous nation. Well, and the emails. Not Ivanka’s, but Hillary’s.

I mean, grab me by my pussy, but this dishonors all who serve this great nation. Get that son of bitch off the field, am I right.

Is this what will be our eventual demise? Apart from the inevitable economic collapse from reckless tax cuts; the continued degradation of our environment and increase in catastrophic weather events; a president who has no understanding of foreign policy, democracy and the correct temperature to cook meat; gun violence that shows no sign of abating, I say yes, yes this profanity is what will do it.