It was an interviewing tour de force. Palin used words in an order that somewhat resembled sentences to fluff Trump’s presidential scepter, and Trump continued to resemble an orange-hued blobfish.

As expected, the interview made America great again.

So you don’t have to watch it and shave years off your life like I have, I condensed it to the highlights. 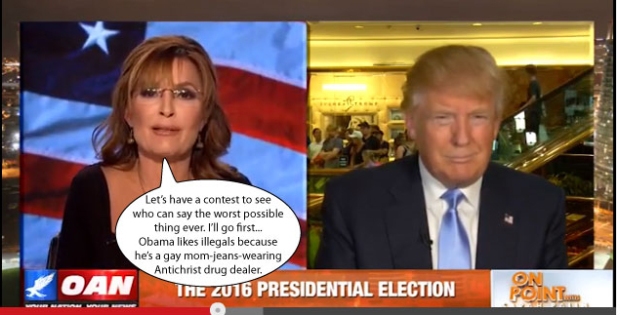 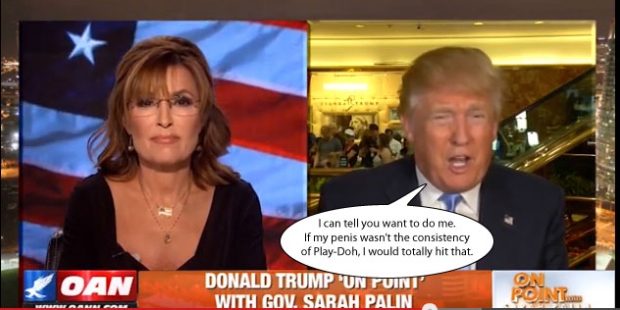 I don’t know about you, but I am suffering from Trump Fatigue™. I would really like to not write anymore about him so America, if you could stop considering him as a real presidential candidate as opposed to a deflated nut sack, I would appreciate it.

Donald Trump, America’s favorite sentient hemorrhoid, is on the cover of Time magazine. According to Time’s editorial staff, several tag lines were tested out to see which best encapsulated the essence of a Trump presidency: 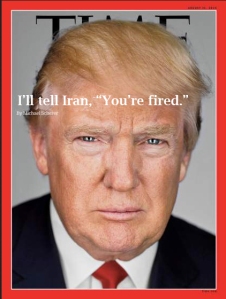 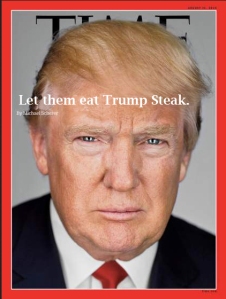 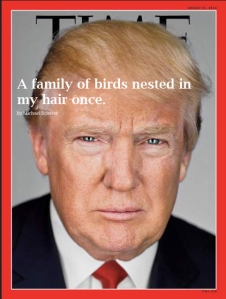 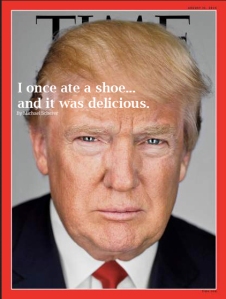 They finally went with this one:

In the video interview, Trump continued to hypnotize the electorate with his special brand of jingoism and his hair confetti.

He pontificated on why he was a better candidate than Hillary Clinton, the likely Democratic nominee: 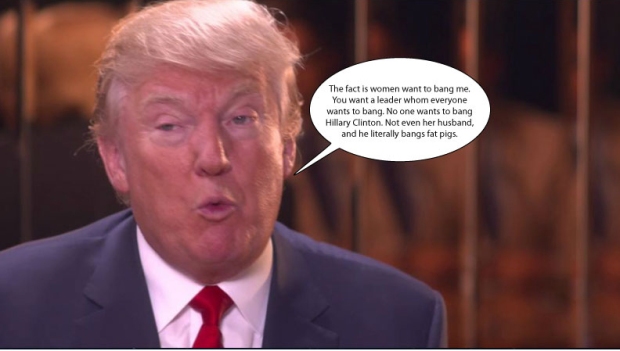 Trump thoughtfully explained how, unlike all other politicians, he was no puppet. He did all his own thinking.

He spoke of a broken, troubled country and how he was just the guy who could fix it.

He presented his reasoned and researched stance on immigration.

The editors attempted to include a photograph of Trump with a bald eagle, but the eagle kept attempting to eat Trump’s head having mistaken it for a muskrat carcass.

They were forced to go with a secondary shot. 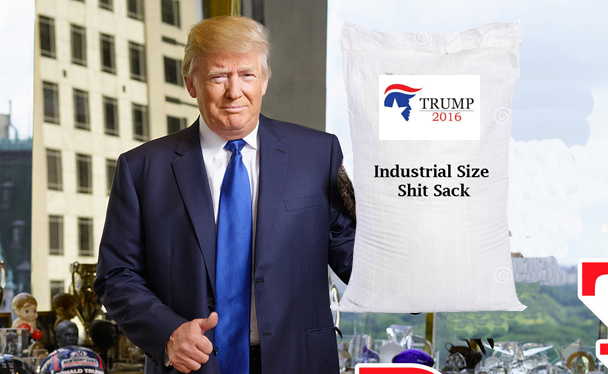 Some parents are concerned that the acquisition of the beloved children’s television show Sesame Street by HBO, the purveyor of breasts, will continue America’s decline into a giant shithole. Justin knows what I’m saying:

Not so, says Jeffrey D. Dunn, chief executive of Sesame Workshop. Things will invariably stay the same with some tweaks to keep Sesame Street up-to-date with the digital natives we ween from breastfeeding apps.

“It will still be Sesame Street with Big Bird, Elmo and that shitbag who lives in a garbage can,” Dunn said. He did note there were would be some content changes to “spice things up in the way HBO viewers are used to, and to make young children enslaved to HBO for life.”

“What I’m basically saying is tits. Lots of tits.”

For examples, writers will focus more on the relationship between Big Bird and Snuffy. They will be recast as 20-something friends trying to find their way in the big city in the style of Girls but with a giant imaginary monster and a talking bird. 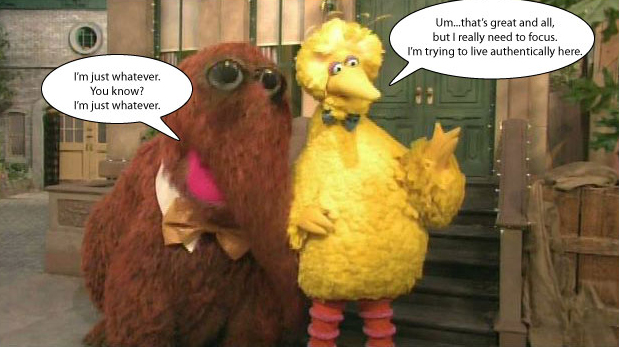 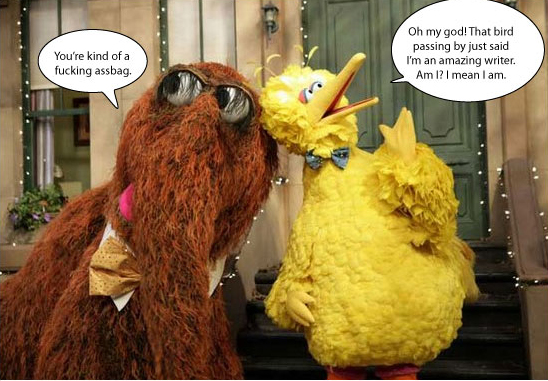 Dunn said more emphasis will be placed on The Count in the sense that he will be given a love interest.

“I mean The Count is kind of a drag,” Dunn said. “Yes he can count. Like bats and whoopie pies, but what if he was involved in an obsessive and dangerous relationship with a southern waitress? Then you’d definitely see your child counting past 20.”

Kid will also be challenged more. Instead of trying to guess what object does not belong in a group, children will be asked to test their talents in solving a mystery.

“We’re talking about taking one of those nondescript muppets like Maggle or Furry and getting real deep into the complexities of the human soul,” Dunn said.

Dunn said it would designed as an anthology. Each season would star different monsters in the detective role. The detectives would all have alcoholism, daddy issues, obsessive needs to pontificate on nonsense that make viewers feel the monsters are deep, and storylines that you believe are good, but in the end suck balls. And there will be many topless muppets used as props because…um…tits?

“But it will be completely for kids because it will take place on different playgrounds across the country,” Dunn said. 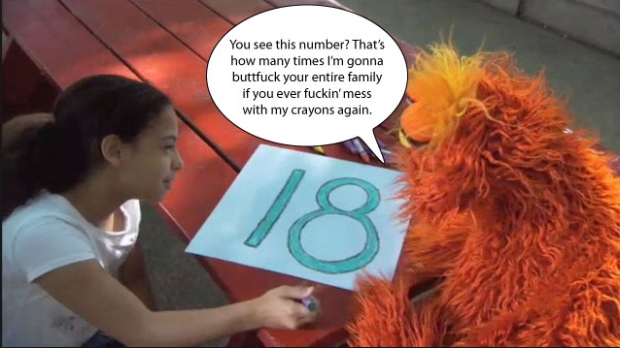 And, or course, the Sesame Street cast will pay homage to Game of Thrones.

I watched the entire GOP debate last night and while my stomach muscles are still strained from all the dry-heaving, I felt compelled to actually write a post to share the highlights.

There were so many good things happening—so, so many. So many fantastic visionaries on one stage, so many enthusiastic audience members cheering the worst things, so many witnesses to the demise of the American democratic system.

It’s really hard to pick a favorite moment, but that doesn’t mean we can’t try.

It began with a shot of the most popular candidate at the moment, Donald Trump. I believe his face truly represents the face of the Republican Party:

There was that special time when Trump was asked about his penchant for calling woman “fat pigs”, “slobs”, “disgusting animals” and “losers who don’t appreciate megalomaniacs with Easter-grass toupees and micropenises”:

Then there was that beautiful moment when the audience cheered wildly about Trump’s claim of referring to only one woman as a “fat pig”.

I also enjoyed when Trump gave “evidence” about his claim that Mexico only sends the criminals, drug dealers and rapists to this country:

Or the moment Trump said his solution to immigration was to build a wall and that he asked former Florida Gov. Jeb Bush to do it:

There was the time Wisconsin Gov. Scott Walker made this face:

And then made this face: 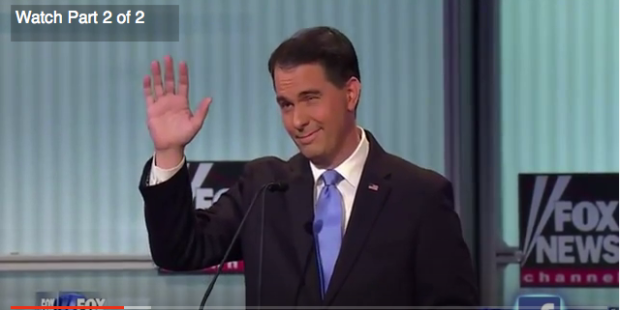 And then opened his mouth and I finally understood the concept of the banality of evil:

Or that time when Sen. Marco Rubio was asked about his support of allowing abortions in cases of rape and incest, and looked like a deer in headlights and began voraciously back-pedaling without the assistance of a bottle of water:

Or the moment when the millionaire candidates tried to out-poor each other:

The time Mike Huckabee challenged the claim from the movie Hustle and Flow that “it’s hard out here for a pimp” and blamed pimps and prostitutes for social security’s budget problems:

The moment Ohio Gov. John Kasich used the “I have a gay friend” defense to deflect a question about same sex marriage: 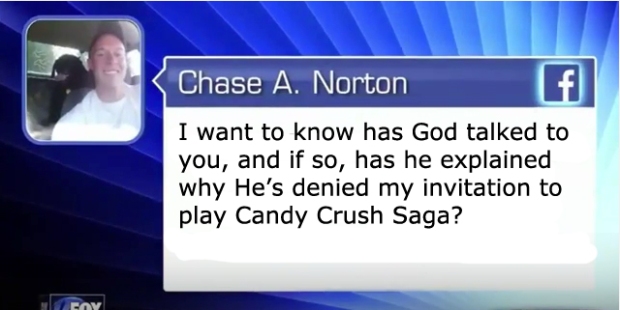 Or when Rand Paul challenged Trump’s “hair” to a fight:

When Trump asked the moderators if he could have one minute to squeeze out a fart: 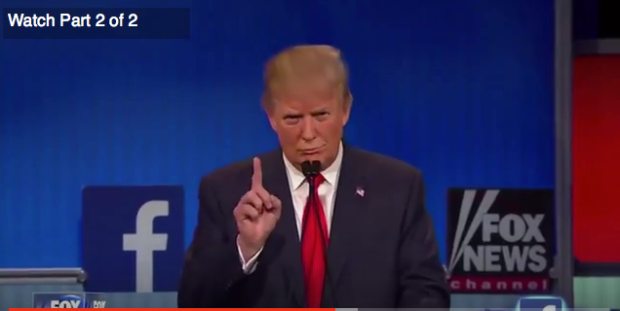 Or when Ted Cruz broke into song:

Breathtaking, really. And we still have over a year until the general election!