Oh gentle reader, I can’t tell you how much I look forward to this time of year.

There’s that special holiday, Black Friday’s Eve, when all the people come together and beat the shit out of each other at Walmart for a $2.00 Himalayan Salt Foot Detox:

And there’s the announcement of People magazine’s Sexiest Man Alive.

People has a knack for picking the blandest sexiest men alive–Bradley Cooper, Ryan Reynolds. I believe one year, People actually selected a roll of paper towels, Brawny® brand of course.

This year People has outdone itself by choosing the amazingly douchey Adam Levine.

Actual quote from the article.

We get to learn about all of Adam’s tattoos. He got a dove five days after the September 11th terrorist attacks because…he’s a douche. A patriotic douche, but a douche nonetheless.

He doesn’t do tattoos below the waist because “you can’t do the hands; that’s sacred too. That’s what you make things with.”

If you are unfamiliar with Adam’s celebrity, he is a songwriter. He is not a brain-damaged umbrella stand. I can understand if you are confused.

He claims he wrote the best lyric at 20. It was:

“If I could bottle up the chills that you give me, I would keep them in a jar next to my bed.”

I am not kidding.

When I was 7, I was in a band with my two cousins called The Three Night Waves. We sang a song that went like this:

for you and us

for all of us

That song is infinitely better.

According to Adam, you can best convey what you want with what you say.

Genius really, and all this time I’ve been conveying my wants through crop circles. 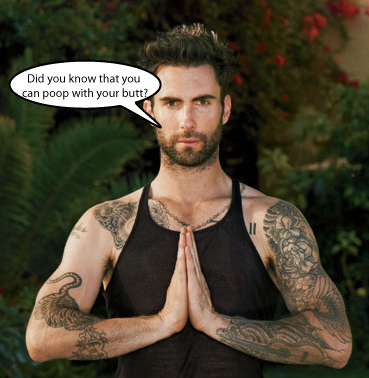 Adam believes in waxing his arms and frequent massaging because he works out so much, but draws the line at mani-pedis because “you’ve got to retain some sort of masculine characteristics. You can’t trim yourself into a tizzy and become a woman.”

True, but you can say things that transform yourself into a monumental douche.

Speaker7 is still plugging along as a member of the Nano Poblano Team. She’s sorry if you think Adam Levine is sexy, but seriously? He seems like an incredible assface douchecanoe.