Shit! I just turned off all the guys who were reading this. Did I learn nothing from Josh Aiello’s seminal article “3 Words He Never Wants To Hear You Say?”

According to Josh, a woman’s…oh excuse me…a girl’s lament about her bulk is the equivalent of a dude cutting off someone’s head times 10. Let him explain:

“To guys, these words are the Holy Grail of annoying things girls say, the abracada bra of instantaneous mood killers. . .”

That is some good analogying. It’s like the King Turd of nonsensical analogies. 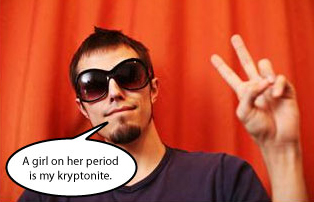 Now you may be thinking, how does Josh know these are the three worst words a woman can say? Wouldn’t  “I love Hitler” or “Equal pay now” or “I hate your writing” (I know that’s four, but my brain is fat) be worse?

Josh did some scientific analysis of this phenomenon by interviewing his wolf pack at Buffalo Wild Wings.

I mean, jesus christ, girls, you with your body issues, which are in no way the fault of a culture and media that value women for their looks and boobies. You are almost distracting me from reading the latest Us Weekly on whose body is definitely not beach-ready.

Adam is this brah by the way:

And the guy is helpless because once you say it, all he can see is your fat mouth spitting out fat words in between crumbs of Entenmann’s. Let Josh set the scene:

I once dated a really pretty girl who was convinced she was overweight. She told me she thought she was fat so often that when my parents came to visit, I didn’t introduce her to them. Why? Because I doubted whether what I saw when I looked at her was what other, more objective people saw.

Wow. Such a powerful story and what an amazing act of courage. It reminds me of the story of Harriet Tubman when she finally decided to make her escape from slavery. Harriet knew it was only a matter of time she would be sold away from her family and husband John. She tried to get John to go with her. “I won’t go with you Harriet,” he said bravely. “You look really fat right now.” Courage.

So what’s a lassie to do?

Incidentally the three words I would never want to hear from Josh are these: