The final post of Speaker7  Proudly Presents a Cliff Notes Version of 50 Shades of Grey with Pivotal Scenes Reenacted by Hugo, the man of 1,000 faces, and Goofy, the recently named blue bunny. If you missed out on the first nine posts then you were born under a lucky star. If you enjoy torment and the overuse of the word “crap”, click here. Incidentally these recraps might be turned into a Hollywood movie with the part of Speaker7 being played by the reanimated corpse of Rin Tin Tin.

It seemed like only yesterday I read the holy craptastic description of Christian Grey pouring himself into Anastasis Steele the first time. But that was a week ago, and the pouring of his seed continued to crop up every third page. It happened so often I expected to read of something growing out of Ana’s down there, like a holy-cowing swamp monster.

Ana and Christian go gliding. They try to exchange bodily fluids in the plane, but are thwarted by the plane’s design and gravity. Christian humps Ana’s leg a little after they land. Ana thinks Holy fuck!

They eat at IHOP because we can never go for more than two pages without Christian’s food obsession cropping up. The waitress begins drooling and blushing the minute she sees Christian because, why not? Why have one woman be normal in this book, right? Christian demands Ana eat all of the pancakes in the restaurant and then the restaurant itself.

Christian has a work “situation” he must attend and flies back to Seattle. Over the phone, Ana senses his eyebrows are arched in a I’m-kinda-mad-and-stuff way. Oh crap noggin’ Ana breathes and farts loudly. 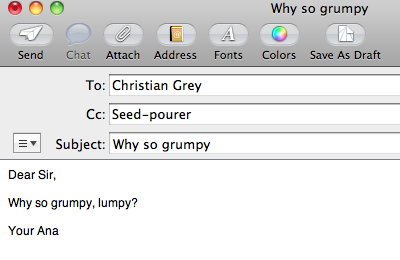 Ana’s phone rings. She breathily answers “Crap?” and learns she has a job as a publishing something or other. “Crap, yes,” she murmurs into the phone and does a few gleeful kegels.

She flies back to Seattle. Christian’s man servant drives her to Christian’s home. When Christian sees her, he blasts her with a fire hydrant’s worth of semen. He still seems kinda pissy though.

Before Ana can murmur or mutter “What’s up, dawg?”, he has her head into the Red Room of Pain for sexy time.

There Christian blindfolds her, restrains her to the bed and turns on Insane Clown Posse’s Greatest Hits at full blast. How do fucking magnets work? Ana wonders as she listens to the music, and her down there muscles clench and shrug and vibrate and expand.

He uses many implements:

They leave the red room of pain and do it again–maybe, I don’t honestly remember, but I have a 90% chance of being correct. Ana wakes up and finds Christian playing a solemn version of “I’m Sexy and I know It” on the piano.

Ana brings up the contract. She still hasn’t signed. Christian doesn’t think that’s necessary as long as she follows his rules:

Christian: Well I do.

Ana: Okay, spank me as hard as you can because…uh…why now? Let me think. It will change him. Yes!

So he beats her with his belt. Romance!

For three seconds Ana is not a used-up tissue and says “Holy cow. This sucks. Bye.” Christian glowers and murmurs and taps his elongated fingers together and sneers a lip.

Ana cries and leaves him a glider model kit: 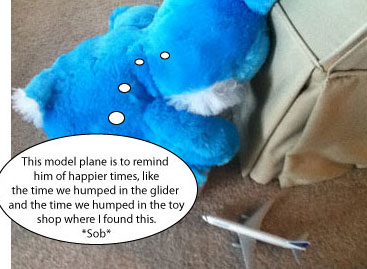 She surrenders herself to her grief. And we are done!

I leave the decision to you, gentle reader, as a good Submissive should.