How many submissives does it take to insert a butt plug?

As many as the dominant says it takes.

Bada-bing. I’ll be here all week!

Before this goes any further, I would like you all to address me as “Sir” in the comments. Or “Lord Voldemort” or “Rubberface Gimp Monkey” or “Chunkstyle”…you know what? Just forget it, I’m too wishy washy to make it as a dominant.

Don’t look me in the eyes.

In this installment of 50 Shades of Tears I’ve Shed, Christian and Ana revisit the red room of pain. To read how we got to this point, click on these recraps or do something pleasurable instead:

Before Christian can chain, truss, knot and braid Ana’s pubic hair, he first lets her visit a lady doctor to examine her nether regions and put her on the pill so he does not have to order elephantiasis-sized condoms from Oriental Trading anymore. The doctor tells Christian to look after Ana as one would a sweet, brain damaged dog. That is, like, so sweet.

Ana’s inner goddess has picked up a couple of pom poms and borrowed a cheerleading outfit from the set of Glee. 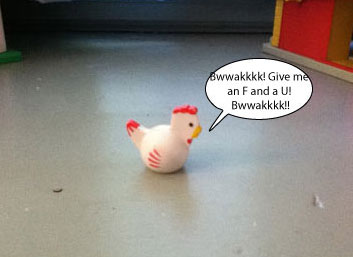 Christian peels off Ana’s clothes leaving her clad only in panties, and makes her kneel–eyes downcast of course–in the corner. No one puts baby in a corner says the ghost of Patrick Swayze.

Christian changes into acid-wash jeans (Holy fuck hot! Ana predictably thinks). He peels off her panties and sniffs them vigorously. I wish I was making this up, but alas, I am not:

He chains her up to a William Sonoma® pot rack and smacks her “down there” with a riding crop. Of course, this causes explosions to rocket through her body:

Throughout this panty-sniffing, Ana desperately wants to lick Christian’s chest. Hot, right? Sure.

Christian is not finished with Ana. He knocks her down like a piñata from the pot rack and secures her wrists with a cable tie. He takes her to bed and has her grasp onto the bed post. He tells her she has a “sexy ass.”

Christian takes Ana, panties-less, to meet his family for dinner. The Grey house is all wood floors and antique rugs with sweeping staircases. That sounds…weird. There’s no furniture? They mutter and murmur at each other. Christian’s sister Mia is a bit different in that she chooses to shriek her remarks. She is not a pomeranian puppy to clear up any confusion, but a full-grown adult woman.

Apparently there is a dining room table. They all sit around it and eat corn dogs–except Christian:

Christian becomes enraged when Ana tells his dad she might go see her mother in Georgia. He clamps his hand like a genital clamp on Ana’s thighs. “C’mon I wanna show you my spanking hand…er…rowing trophies,” Christian glowers and seethes. He takes Ana to the boathouse to have his way with her:

I can’t tell you how much this reminds me of the time I first met my husband’s family…well except for the rowing trophies part.