Ana agrees to be Christian’s submissive in the latest 50 pages of Fifty Ways to Describe Crap. For previous recraps that will not make you beg for more, click here, here, here and here.

This could probably have been completed in one paragraph–heck, one sentence even. I will show you.

“I’ll do it,” Ana says looking at her hands then biting her lip. Not the best move, glowers her subconscious, pushing her half-moon spectacles onto her face. Tra-la-la trills Ana’s inner goddess, churning her arms in the style of the cabbage patch.

I was wrong. It does take more than one sentence when you have to consider Ana’s multiple personality disorder. It takes three, but E.L. James manages to stretch out this decision for 50 pages.

There is murmuring and muttering interspersed with utterances of crap, holy crap and holy shit.

Eyes are flashing and hooded and unreadable and intense and grey-colored. 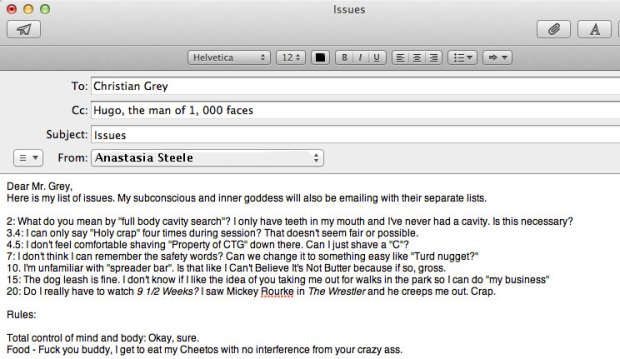 There are moments when Ana feels as if her body is being electrified by Christian, which makes me wonder if he is actually an electrical socket rather than a person, and she is constantly being shocked when she sticks her tongue into it. That would make a much more interesting book, and explain Ana’s brain damage.

A bear shits in the woods. It doesn’t say that specifically in the book, but that has to happen, right?

There is the gnashing of teeth to break down food into particles for quicker digestion and then remarks of “Eat” and “I’m not hungry” and so forth. See:

So much of the same themes we’ve seen in the previous 200 pages, which is why this book would make the greatest drinking game of all time. Here let me show you: 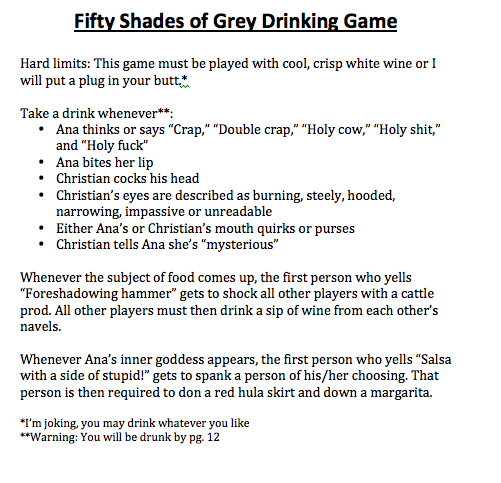 That’s pretty much it. I do want to include a picture I took today of Hugo and Goofy since I posed them outside and I am 100 percent sure my neighbor was watching. Ana graduates with a bachelor’s degree in lip-biting. Christian, a huge benefactor of the college (the name of which I’m too lazy to look up), is conferring the degrees. This is where she agrees to be his submissive: 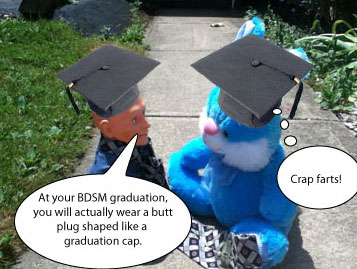 For the next 50 pages, I will be following the 50 Shades of Grey Drinking Game.