I held Darrell Issa’s hand the first time he got his period. He was worried.

“Am I going to die?” he asked through his tears. “I feel like I’m dying. The blood. The pain.”

“You’re not dying, you’re becoming a woman,” I answered.

“What does that mean?” he asked earnestly.

“Well, it means that you are able to have children of your own,” I said, wrapping an afghan around his shoulders and handing him a mug of chamomile tea to help ease the cramps. “Someday, you’ll fall in love, get married and then chair a government oversight committee that will try to deny basic health care to women under the guise that it is infringing on the religious beliefs of others.”

I was just kidding when I told him that so many years ago, but then this week, I realized Darrell took what I said to heart.

The fretful preteen who danced to Like a Virgin in my living room, banged a gavel and said the health care provision of mandating contraceptive coverage for women was akin to kicking God in the nuts (I’m paraphrasing).

“Women should be forced to have as many children until their uteruses or is it uteri? resemble beaten-up change purses made out of cheesecloth. And then they are put to sleep. It’s nature and religion. It’s naturally religious,” Darrell solemnly said.

Although I was appalled, I was happy that Darrell at least brought in male religious leaders who are the leading experts in women’s health to testify before his committee. Those with uteri were told to stay out of it. The experts said things like:

When asked about their comments, Jesus stated “I don’t know these guys, man.”

There is so much I don’t understand.

First, why did God kill Onan when Onan spilled his seed on the ground rather than in his brother’s wife (Genesis 38:9)?

And lastly, why did I jump the gun on handing out my Turd of the Week™?  Please accept this turdendum. 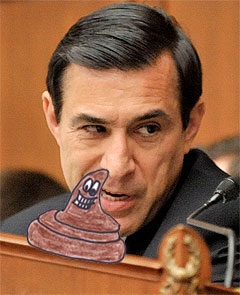 And God said to the turds: "Be fruitful and increase in number."