Ashton Kutcher is a well-paid moron. 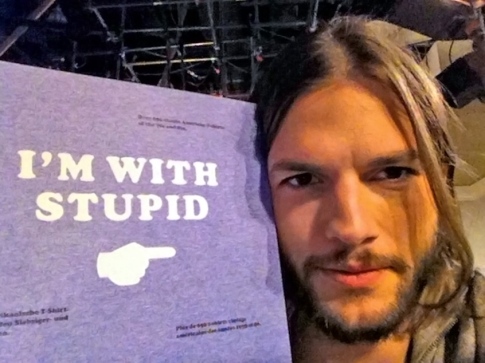 This is fact, and therefore makes about as interesting a news story as gravity keeping us from floating all around and people being created 6,000 years ago by Xenu, the dinosaur engram.

Yet there are a bunch of news stories circulating about Ashton Kutcher, aka a well-paid moron, tweeting something moronic on Twitter.

The fact that a well-paid moron, aka Ashton Kutcher, would have only a cursory understanding of one of the most horrifyingly horrible-beyond-horror-in-its-complete-and-utter-wrongness new stories, is not news.

Because he is an idiot. And yet he is now a featured star in this sordid, I-will-never-get-my-eyeballs-clean-from-reading-the-grand-jury-report, mess.

A Google search of “ashton kutcher penn state” returns almost 1 million results whereas the phrase “speaker7 for president” returns nothing. Where is the justice? (Yes, I understand that by writing this, I will be only adding to Ashton’s Google result count, but now at least there might be one result for “speaker7 for president.” And if I became president, I would immediately dissolve three federal agencies: the education department, the commerce department and .  . . um. . . that other one….right, the Twitter department)

Seeing these stories about Ashton Kutcher almost make me mad enough to tip over a news van and chant the name of a football coach who pretty much gave tacit approval to someone in his employ to rape many, many vulnerable, defenseless children. Almost–I would never do something so bewilderingly moronic.

Admittedly I don’t follow Ashton Kutcher on Twitter. I don’t follow anyone on Twitter because I don’t understand it and I waste enough time on the Internet as it is. But I guess Mr. Kutcher will now have some PR firm vetting his tweets as if he was reporting from the Hindu Kush mountain range with the 2nd Ranger Battalion.

Update speaker7.wordpress.com is now being vetted by a PR firm.